​​NASA is training human-like robots to explore caves on Mars 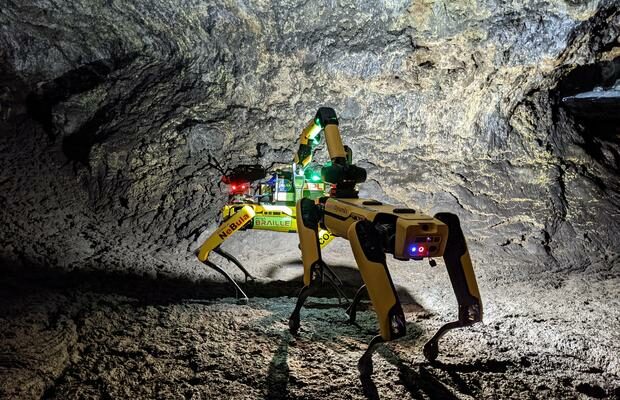 When searching for signs of life on other planets, scientists say caves are a crucial place to look. But how can a team on Earth effectively explore intricate, dark, unfamiliar landscapes on another world? NASA and Boston Dynamics have found an answer: Fully autonomous robots.

Caves are one of the most likely places to find signs of both current and past life on other planets because they are capable of protecting life from cosmic rays and extreme temperature fluctuations around our solar system. A NASA project called BRAILLE is now working on exploring Mars-like caves that already exist on Earth in order to hone key technologies for future missions. According to researchers, the project has enabled the first-ever fully autonomous robotic exploration of these types of caves, which are several hundred meters long and limit communication with the surface. As the robots explore, with no prior information about the environment, a team of researchers outside the cave simultaneously performs actions that scientists on Earth would be executing during a real Martian mission.

The research, which project lead Ali Agha said could “fundamentally change how we think about future missions,” is now in year three of four in its quest to journey to the moon, the red planet and beyond.But researchers are interested in exploring caves for another reason beyond finding signs of life: caves provide obvious natural shelters for future astronauts exploring Mars or the moon.

“Future potential human exploration missions can benefit from robots in many different ways,” Agha told CBS News. “Particularly, robots can be sent in precursor missions to provide more information about the destination before humans land on those destinations. In addition, robots can accompany astronauts during the missions to help with scouting certain terrains or with logistics and many tasks that can make astronauts’ missions safer and more efficient.”

So, how is designing a Mars robot different from designing an Earth robot? They are similar in a lot of ways, Agha said, especially when it comes to the AI robot brain, called NeBula, and its ability to process information and make decisions when they don’t have contact with scientists on Earth.

But when it comes to the robot body, that’s where things get more complicated. Scientists need to consider temperature management, shielding the robots from radiation, as well as the severe power and energy constraints that come with trekking to a far-away world — all aspects not previously considered on Earth.

“SPOT is one of the most capable robots that we have and it is amazing to see how it successfully reacts to high-level decisions and commands coming from the robot brain and how it can maintain stability over rough and extreme terrains,” Agha said. “In addition to our capable traditional wheeled rovers, the ability to “walk” is a huge asset when dealing with uneven terrains with no roads and no flat surfaces.”

There are three main factors for the robot’s success:

“We have these multiple mobile robots that can carry different instruments, as opposed to one big robot that’s going to have trouble traversing its terrain,” said deputy project lead Benjamin Morrell, referring to past Martian rovers.

“Boston Dynamics Spot robot is one of the few robots that satisfy these constraints simultaneously,” Agha said. “So integrating our robot brain, NeBula, on Spot has been pushing the boundaries of what was possible in exploring unknown Mars-like environments.”

The robots typically cannot communicate from inside the cave, so scientists eagerly await their return to the surface for data, which could include a 3D map of the cave’s interior, information on science targets or general findings about the environment.

Some of the robots are also equipped with arms to bring back small samples from the cave walls for analysis. Researchers hope that these robots will be able to autonomously carry out parts of future missions in space, after humans have built up a certain level of trust with them.

“The next-generation robot bodies and mechanical locomotion capabilities would enable new types of missions over terrains that were otherwise inaccessible by traditional rovers,” Agha said. “Also, due to the increased speed and traversal capabilities, future missions can target destinations that are traditionally considered to be too far from landable regions on Mars.”