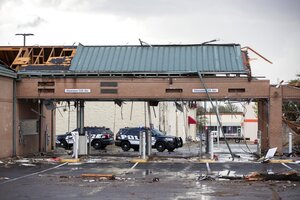 DALLAS (AP) — One person was killed when a tornado swept through North Texas, officials said Tuesday.

Grayson County Office of Emergency Management Director Sarah Somers said a 73-year-old woman died when the tornado hit the community of Sherwood Shores, Texas, on Monday night. Ten other storm-related injuries have been reported in the county about 90 miles (145 kilometers) north of Dallas and near the state’s border with Oklahoma.

The same storm system was poised to move into Louisiana and Mississippi on Tuesday, carrying the risk of dangerous tornadoes and powerful winds.

More than a dozen people were injured when tornadoes tore parts of Texas and Oklahoma, damaging a school, homes and businesses, officials said. The same storm system was poised to move into Louisiana and Mississippi on Tuesday, carrying the risk of dangerous tornadoes and powerful winds.

In Texas, several tornadoes were reported Monday along the Interstate 35 corridor, particularly in the Austin suburbs of Round Rock and Elgin, and close to Dallas-Fort Worth. Two unconfirmed tornadoes caused damage in the Lake Texoma area of northern Texas and southern Oklahoma.

More than a dozen injuries have been reported in Texas, including 10 in Grayson County, about 60 miles (95 kilometers) north of Dallas, the county’s emergency management office said.

By Tuesday morning, the system was bringing heavy rainfall and thunderstorms to parts of Texas and Arkansas, said Jeremy Grams, lead forecaster with the Storm Prediction Center, in Norman, Oklahoma. A tornado watch was in effect for parts of Texas and Louisiana.

In Louisiana, high water early Tuesday posed a threat to motorists on several roads, including a stretch of Interstate 20 and several state highways after rains overnight, authorities said. Deputies in Caddo Parish, which includes Shreveport, rescued three drivers from high waters during the night, the sheriff’s office tweeted before dawn.

The storms were expected to intensify throughout the day as temperatures rise, increasing the threat of tornadoes, hail and strong winds. Much of Louisiana and Mississippi were at a moderate risk of severe weather Tuesday, the second-highest risk category issued by the Storm Prediction Center. Baton Rouge, Louisiana, and Jackson, Mississippi, were among the cities at risk for bad weather Tuesday.

“We’re still a bit uncertain on just how intense and how longer-lived some of these tornadoes may be, so we’re going to be just below that threshold of the greatest risk,” Grams said Tuesday morning.

Forecasters were predicting intense tornadoes and widespread damaging winds, some hurricane-force with speeds of 75 mph (120 kph) or greater, in much of Mississippi, southern and eastern Louisiana, and western Alabama.

Louisiana’s federal and state authorities reminded thousands of hurricane survivors living in government-provided mobile homes and recreational vehicle trailers to have an evacuation plan because the structures might not withstand the expected weather. More than 8,000 households live in such temporary quarters, officials said.

The storm already left misery in its wake in Texas. Damage to homes and businesses occurred in at least a dozen Texas counties, according to reports submitted to the Storm Prediction Center.

Officials reported damage throughout Jacksboro, about 60 miles (100 kilometers) northwest of Fort Worth. There, photographs posted on social media showed a storm ripped the wall and roof from parts of Jacksboro High School, especially its gym.

Texas Gov. Greg Abbott said during a news conference Monday night in suburban Austin’s Williamson County that he was thankful that there were no reports of fatalities.

“We know there are many people whose lives have been completely disrupted and people who’ve lost their homes,” Abbott said. “At the very same time … it may be a miracle also, because even though there’s been some devastating physical damage, to my knowledge, as of right now, there is no report of loss of life, which is just stunning.”