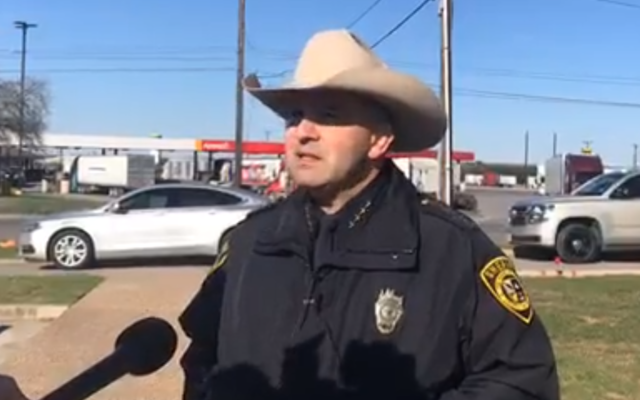 Bexar County Sheriff Javier Salazar discussing the details of a vehicle theft in the northeastern part of the county on Feb. 26, 2020. Screeenshot: Bexar County Sherfiff's Office/Facebook

CONVERSE, Tex. (KTSA News) — The search is on for a suspect who stole a pickup truck in northeastern Bexar County Wednesday morning and dumped it outside a Jack in the Box restaurant when they realized there was an infant inside.

Bexar County Sheriff Javier Salazar said his office got a call about a theft of a vehicle at around 7:30 a.m.

At roughly the same time, the suspect and a trail car stopped at the Jack in the Box restaurant on Foster Road near Interstate 10 in San Antonio.  They went in and told the manager that there was a baby left in the truck.  The suspect then left the scene.

A deputy looking for the stolen vehicle found it at the restaurant before the workers were able to call police.

The infant is safe and returned to its parents.

The sheriff said the suspect — despite doing the right thing and not running off with the child — will face a slew of charges, including kidnapping if warranted.

Additionally, the sheriff said this will likely become a Crime Stoppers case as his office continues to search for the suspect.  If you have any details that can assist in the case, you are asked to call Crime Stoppers at 210-224-STOP.  A cash reward for information leading to an arrest will be available.