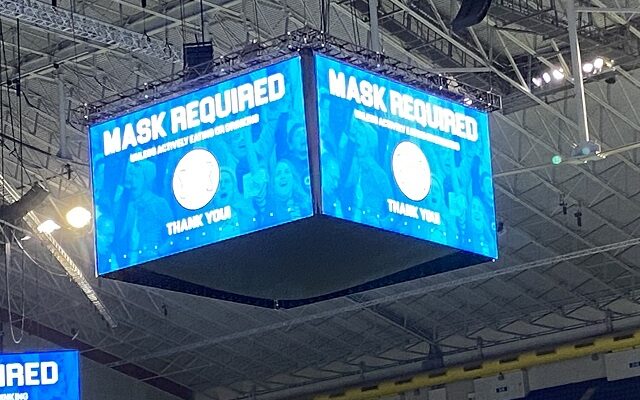 According to the city’s code enforcement page, 10 individuals at the Alamodome were cited for “repeated refusal to wear  masks” or  for refusing “to wear masks properly after receiving prior warnings.” Seven others were issued warnings or left the event or were escorted out for mask use violation.

During a media tour of COVID-19 safety measures before the Alamo Bowl, officials warned that attendees would be required to wear masks at all times, except when eating or drinking in their seats. It’s the policy that’s been in place at Alamodome events during the pandemic, including 6 UTSA games.  Alamodome manager Stephen Zito says ushers warn people who violate the mask rule, but individuals who ignore those warnings are issued citations.

“If there’s any type of confrontation, at that point, we’ll call code compliance officers down.  They will speak to them about the policy,” said Zito.

If the person still refuses to put a mask on, Zito said they’ll be issued a citation and will be ejected out of the building.

Attendance for events at the Alamodome is limited to 17 percent. While the venue can accommodate more than 60,000 people, officials at the Alamo Bowl said maximum attendance allowed for the game Tuesday night would be no more than 11,000.

At the COVID-19 briefing Tuesday evening, Mayor Ron Nirenberg reminded viewers that the safety measures at the Alamodome would be strictly enforced.

“I was pleased to see that there is going to be very strict oversight and enforcement, so we will hold ourselves accountable to that,” the mayor said. ” We want to make sure that anyone who is there at the Alamodome is ready to adhere to the health department guidance. If they’re not, they should be watching it at home.”

The University of Texas Longhorns stomped the Colorado Buffaloes 55-23.