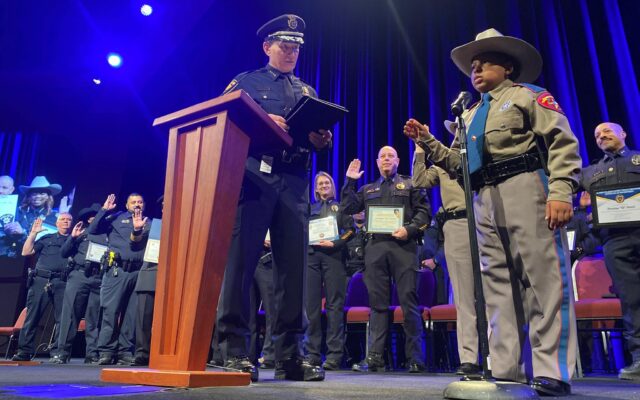 DJ Daniel was sworn in to nearly 40 law enforcement agencies from across the state on Monday, February 8, 2022. (KTSA News/Katy Barber)

SAN ANTONIO (KTSA News) — A 10-year-old boy is going viral for his love of law enforcement and was recognized in San Antonio this week.

Police departments from across the state — from Dallas to Laredo — were also included.

DJ is a plucky and hilarious 10-year-old diagnosed with terminal brain and spine cancer a little more than three years ago.

“The cancer ride has been something I can’t explain,” DJ’s father Theodis Daniel said, noting his son has had 11 brain surgeries so far. “He just gets up in the morning and gets it done. … He doesn’t complain, he doesn’t want to put that energy on anyone else. He just wants to hear that positivity.”

DJ’s paternal grandfather was stationed at Lackland Air Force Base for 20 years, bringing Theodis to San Antonio and his mother Demitra Johnson was born in the Alamo City.

DJ himself was born in San Antonio and moved to Houston with his family shortly before Hurricane Harvey in 2017. He was also diagnosed with cancer six months after the move.

In the aftermath of the storm, their family needed to take shelter at the George R. Brown Convention center, Theodis said Monday. It was during this time that DJ became passionate about law enforcement, his father said.

DJ was sworn in wearing the iconic “Texas Tan” uniform that State Troopers are known for donning.

“Has the Texas Tan ever looked any better?” Texas Department of Public Safety Regional Director Todd Snyder said, noting there was an important piece of the uniform missing: the specially crafted black cowboy boots emblazoned with the Texas DPS logo. 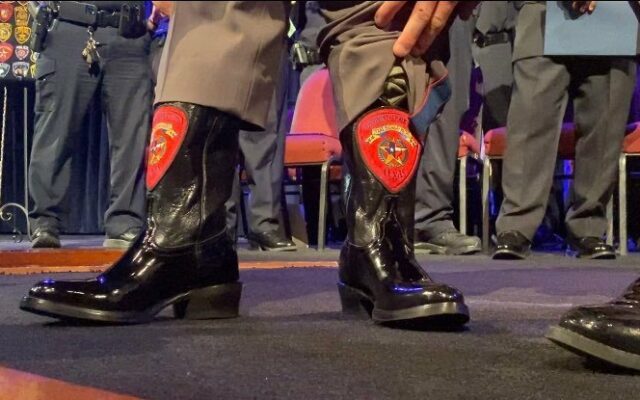 DJ spent a few days in San Antonio leading up to Monday’s ceremony chaperoned by SAPD. He was honored at Friday’s Spurs basketball game against the Houston Rockets, spending time with Coyote, and was gifted Dejounte Murray’s sneakers worn during the game.

DJ’s original goal was to be sworn in by 100 law enforcement agencies.

DJ blew past that number before coming to San Antonio and will likely be collecting more honorary officer positions across the country — San Antonio police officer Doug Greene said agencies nationwide like Hawaii, Alaska and New Mexico have reached out about also swearing DJ in.

“He is an inspiration to me personally,” Green said. “He’s lifted my spirits and every single person I think he came in contact with, he had an impact on. That’s rare right now and I’m just honored to have been part of that experience.”

A GoFundMe is available to assist the family with medical expenses.