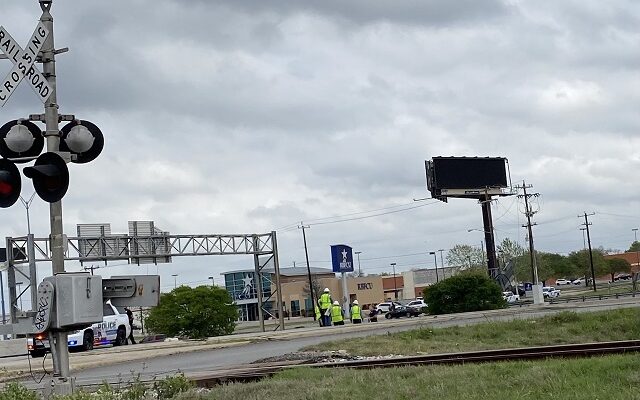 UPDATE:  Two people are hospitalized after a bizarre rollover accident involving a tractor trailer that knocked down a highway sign, power lines, a utility pole and caused a fire in the city’s Northeast Side.

Police say the driver of a Peterbilt tractor truck  pulling a dump bed trailer was northbound on Ih 35 when the hydraulics began raising the trailer.  The elevated trailer bed hit overhead power and fiber optic lines that stretched across all lanes of IH 35 North between Eisenhauer Road and Walzem Road just before 1 Tuesday afternoon.

The Peterbilt and trailer overturned and broke the overhead wires causing damage to several vehicles.  The impact pulled down power lines and a utility pole across the highway off of Southbound IH 35, sparking a grass fire at Appliance Smart Factory Outlet.

The 43-year-old truck driver and his female passenger were taken to area hospitals.  The 31-year-old woman suffered head injuries.

The accident also knocked out power in the area.

SAN ANTONIO (KTSA News) – A rollover accident involving an 18-wheeler brought traffic to a standstill on IH 35 near Walzem Road in  the Northeast Side Tuesday afternoon.

The crash occurred around 1 pm on the NB lanes.  The truck knocked down a highway sign, brought down power lines and knocked down a utility pole on the other side of the expressway off of SB IH 35 at Lanark prompting officers to shut down both directions of IH 35.

The incident also caused a power outage, leaving about  6,000 CPS customers in the area.  It sparked a fire outside Appliance Smart Factory Outlet when power lines brought down a utility pole.