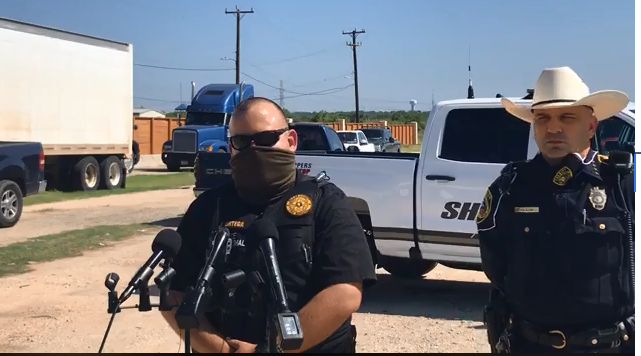 SAN ANTONIO (KTSA News) -Bexar County authorities descended on a mobile home park in the far Northeast Side Tuesday which has been the site of recent arson fires and other crimes.

“People have been living in squalor here and it’s become a nuisance property to the sheriff’s office and to area residents,” Salazar said.

He claims squatters and homeless people have taken over several of the mobile homes and some have illegally connected utilities to those structures.

“We’ve identified a total of 55 vacant and unsecured structures,” said John Ortega, chief investigator in the Bexar County Fire Marshal’s office.  “The property owner is in the process of being issued fire marshal’s orders requiring the remediation of those hazards.”

There have been numerous arson fires at the mobile home park, with the most recent occurring last week.  KTSA News reported on a fire that destroyed two mobile homes in February.  Deputies on Tuesday arrested two arson suspects.

“They were trying to intimidate some of the witnesses in those arson cases,” Salazar said.

“Our auto theft people are out here and they’ve just discovered a stolen backhoe,” he said.