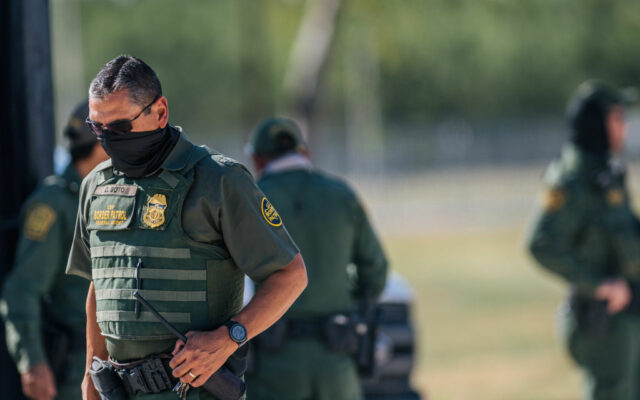 DEL RIO, TEXAS - SEPTEMBER 22: Border Patrol agents work a checkpoint at an entry near the Del Rio International Bridge on September 22, 2021 in Del Rio, Texas. Thousands of immigrants, mostly from Haiti, seeking asylum have crossed the Rio Grande into the United States. Families are living in makeshift tents under the international bridge while waiting to be processed into the system. U.S. immigration authorities have been deporting planeloads migrants directly to Haiti while others have crossed the Rio Grande back into Mexico. (Photo by Brandon Bell/Getty Images)

Two Border Patrol agents were fired from among 60 found to have committed misconduct for participating in a private Facebook group that mocked migrants and lawmakers, investigators said Monday in the most detailed public account yet of an episode that tarnished the agency’s reputation.

Most agents’ penalties were significantly reduced from recommendations of an internal review board, according to the House Oversight and Reform Committee staff report. In the end, 43 others were suspended without pay, 12 got written reprimands and three were disciplined in other ways, such as suspension with pay.

Customs and Border Protection’s Discipline Review Board proposed that 24 of the 60 agents be fired after news organizations reported on the group in July 2019 but only two were. It investigated 135 allegations of misconduct.

One fired agent in Texas with 10 years in the Border Patrol posted an image of Pepe the Frog, “a symbol of the alt-right and white supremacy,” and doctored images of President Joe Biden touching U.S. Rep. Alexandria Ocasio-Cortez, D-N.Y., the report said. The other, California-based agent, who was at the agency for 20 years and was disciplined in 2005 for undisclosed reasons, published homophobic memes and a doctored image of then-President Donald Trump raping a member of Congress. The report doesn’t name the lawmaker but Ocasio-Cortez has said she was depicted being raped on the Facebook group, named “I’m 10-15.

“I’m 10-15,” which is Border Patrol code for migrants in custody, had about 9,500 current and former agents as members, including two agency chiefs, the report said. Carla Provost, who was chief from August 2018 until January 2020 after more than a year as acting head, joined in 2017 and told authorities that she used it to get an “unfiltered gauge” of reactions to her statements. Rodney Scott, who succeeded Provost until being forced out in August, said his membership enabled him to communicate with staff and “know what the workforce is talking about.”

CBP’s Office of Professional Responsibility, akin to a police department’s internal affairs office, found insufficient evidence to discipline Provost or Scott, the report said. Provost searched Facebook for “I’m 10-15” and was active on the social media site around the time of the offensive posts but didn’t contribute inappropriate content. Scott said he twice spotted questionable content involving migrants but that it didn’t rise to the level of reportable misconduct.

House investigators said the images and content are “antithetical to the CBP ethos and undermine the work carried out by dedicated CBP employees every day.”

“Unfortunately, the agency failed to take adequate steps to prevent this conduct or impose consistent discipline on agents who engaged in it, creating a serious risk that this conduct could continue,” investigators wrote.

Customs and Border Protection, which oversees the Border Patrol, said Monday that it is part of an internal departmental review ordered by Homeland Security Secretary Alejandro Mayorkas “to identify and terminate intolerable prejudice, and to reform policies and training.”

“CBP will not tolerate hateful, misogynist, or racist behavior or any conduct that is unbecoming of the honor we hold as public servants,” the agency said in a statement.