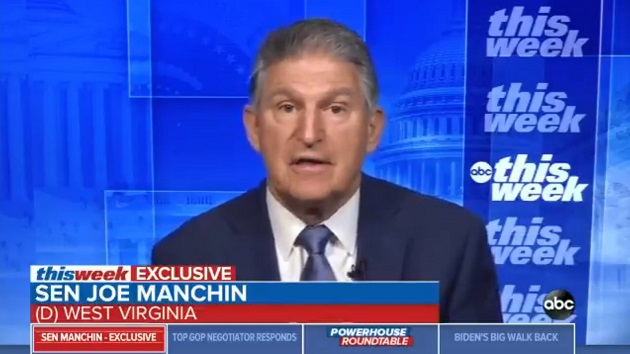 “I was very glad to see the president clarify his remarks because it was inconsistent with everything that we had been told all along the way,” Sen. Rob Portman, R-Ohio, told ABC “This Week” co-anchor Jonathan Karl.

Passage of the negotiated $1.2 trillion infrastructure deal appeared to be in jeopardy Friday, less than a day after it was touted by Biden and a bipartisan group of senators at the White House, including Portman and Sen. Joe Manchin, D-W.Va.

In a lengthy statement on Saturday, the president attempted to clarify a perceived ultimatum that his support of the infrastructure deal was dependent on the passage of the separate American Families Plan through reconciliation.

In his statement, Biden said his comments “created the impression that I was issuing a veto threat on the very plan I had just agreed to, which was certainly not my intent.”

“We were all blindsided by the comments the previous day which were that these two bills were connected,” Portman said Sunday.

“We can move forward with a bipartisan deal that is broadly popular.” https://t.co/QiMvnsbwFA pic.twitter.com/iVRch2YhoX

“It’s very clear that we can move forward with a bipartisan bill that’s broadly popular not just among members of Congress, but the American people,” Portman continued.

He added that there’s been good faith on both sides of the negotiating table throughout the process.

In a separate, exclusive interview on “This Week,” Manchin touted the fact that this is the largest infrastructure package in U.S. history and that there “absolutely” is an infrastructure deal Congress can pass and that Biden will sign.

“There has never been a doubt in my mind that (Biden) is anxious for this bill to pass and for him to sign it, and I look forward to being there when he does,” Manchin continued.

Sen. Joe Manchin tells @jonkarl there “absolutely” is an infrastructure deal Congress can pass and Pres. Biden will sign: “This is the largest infrastructure package in the history of the United States of America.” https://t.co/aG3Ud6cQDs pic.twitter.com/IrodnkVGa0

Although Biden’s clarifications may have soothed the Republicans who have said they would not support an infrastructure package that was linked to raising taxes, progressive Democrats remain firm in their stance to pass a separate bill — based on Biden’s plan to make significant investments in childcare, health care and education — using reconciliation, which would only require 50 votes in the Senate.

“Are you sure progressives are going to support your bipartisan bill if they don’t get a guarantee on something bigger also passing?” Karl pressed Manchin.

“I sure hope so. I hope they just look at the bill,” Manchin responded. “We have two tracks. And that’s exactly what I believe is going to happen. And we’ve worked on the one track. We’re going to work on the second track. There’s an awful lot of need.”

.@jonkarl presses Sen. Joe Manchin on some progressives’ pushback against a bipartisan infrastructure deal: “Are you sure progressives are going to support your bipartisan deal?”

Sen. Manchin: “I sure hope so, I hope they just look at the bill.” https://t.co/aG3Ud6cQDs pic.twitter.com/buCoqvVcUk

Manchin added that there needs to be a way to increase federal funding for human infrastructure and pointed to an increase of the corporate tax rate as a possible solution.

“I never thought that the net corporate tax should have been 21%. I always felt that 25 was very fair and balanced. So I’m willing to go to 25. I think that basically, capital gains should be at 28%, not at 21,” Manchin said.

Karl also asked Manchin about his stance on the filibuster.

“Why don’t you draw a redline and say, look, if you guys don’t move on this, I’m going to go and endorse doing away with the filibuster?” Karl asked.

“I don’t wish this on anybody,” Manchin said without directly acknowledging the filibuster. “I tell people, I’m fiscally responsible and socially compassionate.”

“I’m willing to meet everybody halfway. If Republicans don’t want to make adjustments to a tax code — which I think is weighted and unfair — then I’m willing to go reconciliation. That’s how you’re able to do it,” Manchin added. “But if they think in reconciliation I’m going to throw caution to the wind and go to $5 trillion or $6 trillion when we can only afford $1 trillion or $1.5 trillion — I can’t be there.”

With the bipartisan deal focused on hard infrastructure, such as funding roads, bridges and waterways, Manchin and Portman agreed it can and should be approved by Congress.

“This is the least controversial thing that you could be working on with the other party. What does it say if you fail here? I mean, if you can’t even come to an agreement on this?” Karl asked Portman.

“There’s still a long way to go,” Portman responded. “But you’re right, infrastructure is different. We’re not talking about health care or taxes. We’re talking about something where there’s broad support. And that’s what matters — is that people are looking for us to get something done.”

.@jonkarl asks GOP Sen. Rob Portman “what does it say if you fail to come to an agreement” on the infrastructure bill amid a show of bipartisanship?

Sen. Portman: “People are looking for us to get something done… more generally to work together.” https://t.co/QiMvnsbwFA pic.twitter.com/xvRrcPdhVN