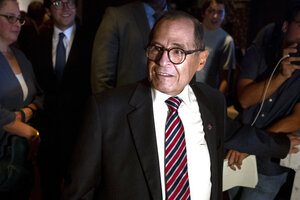 NEW YORK (AP) — In a cluster of contentious Democratic primaries Tuesday, two New York incumbents were ousted from the U.S. House after redistricting shuffled congressional districts in one of the nation’s largest liberal states.

Rep. Carolyn Maloney, a 15-term incumbent who chairs a powerful House committee, and Rep. Mondaire Jones, a first-term progressive who was one of the first openly gay Black members of Congress, lost their seats.

Maloney lost to her longtime colleague, Rep. Jerry Nadler, who became her rival as their longtime Manhattan congressional districts were merged.

Jones lost a packed primary in Manhattan and Brooklyn to Daniel Goldman, a former federal prosecutor who served as counsel to House Democrats in the first impeachment inquiry against Trump.

In other races in the state, t he chair of the House Democrats’ campaign arm, Sean Patrick Maloney, survived a primary challenge of his own from a progressive. Democrats kept a swing districts in a special election — at least for a few more months.

In Florida races, an incumbent Republican narrowly defeated a far-right provocateur. Meanwhile, U.S. Rep. Matt Gaetz, a conservative firebrand, won his primary with the specter of a federal investigation looming over him.

Some of the top elections:

END OF AN ERA

Nadler and Carolyn Maloney each chair powerful committees and had spent 30 years representing Manhattan’s Upper West Side and Upper East Side, respectively. But they ended up in the same race after new redistricting maps merged much of their longtime congressional districts.

The race for New York’s 12th District, between Maloney, 76, and Nadler, 75, became contentious. The two stopped speaking after deciding to run against each other, Nadler said, and the campaign became barbed, with Maloney questioning his mental acuity.

Nadler, who was endorsed by Senate Majority Leader Chuck Schumer, has talked up his role overseeing Donald Trump’s impeachments while serving as chair of the House Judiciary Committee. Maloney has touted her own check on the former president while serving as chair of the powerful House Oversight Committee and positioned herself as a feminist champion.

Challenging them both was 38-year-old lawyer Suraj Patel, who argued it was time for a new face in Congress.

A CROWDED FIELD FOR AN OPEN SEAT

With Nadler and Maloney running in the district immediately north, a congressional seat covering southern Manhattan, including Wall Street, and Brooklyn, was a rare open contest in one of the most liberal and influential areas of the country.

Daniel Goldman, a former federal prosecutor who served as counsel to House Democrats in the first impeachment inquiry against Trump, won a crowded primary for New York’s 10th District, which attracted a bevy of progressive candidates. Among the contenders was Jones, congressman from the New York City suburbs, who moved to the area to run.

Maloney, who had the backing of former President Bill Clinton, campaigned on Democrats’ recent legislative wins in Congress and warned that the congressional seat could fall to Republicans in November if the Democratic nominee is too liberal.

Biaggi, a 36-year-old progressive endorsed by Rep. Alexandria Ocasio-Cortez, is a granddaughter of former Bronx congressman Mario Biaggi. She had sought to portray Maloney as out of touch and part of the establishment.

Paladino, who unsuccessfully ran for governor in 2010, has a long history of inflammatory and offensive remarks, including recent comments that praised Adolf Hitler and circulated conspiracy theories around mass shootings.

The heated primary came as Langworthy and Paladino sought to replace GOP Rep. Chris Jacobs, who decided not to seek reelection after facing backlash from his own party for voicing support for an assault weapons ban following a racist mass shooting in his hometown of Buffalo in May.

In addition to the primary races, New Yorkers elected two new House members to fill vacancies for the rest of the year.

In western New York, Republican Joe Sempolinski defeated Democrat Max Della Pia in a special general election to serve out the rest of the year in what is currently New York’s 23rd District. Sempolinski will replace Republican Rep. Tom Reed, who resigned in May after being accused of sexual misconduct.

Florida Republican Rep. Dan Webster defeated Laura Loomer, a far-right provocateur in Florida who’s been banned on some social media networks because of anti-Muslim and other remarks.

Webster had been in an unexpectedly tight race against Loomer, a nationally known activist who sought to align herself with former President Donald Trump.

Webster, who has served central Florida districts since 2011, won the primary for a race in Florida’s 11th District, which is home to The Villages, the nation’s largest retirement community and a GOP stronghold.

Loomer unsuccessfully ran for the House in 2020, winning a Republican primary but losing the general election that year to incumbent Democrat Lois Frankel for a Palm Beach-area seat that includes Trump’s Mar-a-Lago resort.

On social media, Loomer regularly posted conspiracy theories and misinformation around Minnesota’s Ilhan Omar, the first Somali American elected to Congress. Among them was the false claim that Omar and other Democrats were plotting to institute Sharia law in Minnesota.

Florida Rep. Matt Gaetz, a Trump protégé who is under federal investigation in a sex trafficking case, won a primary contest that was seen as a test of whether he could keep support among moderate Republicans.

Gaetz has not been charged and denies wrongdoing. He was facing a challenge from Mark Lombardo, a former Marine and executive at FedEx who had blanketed the western Panhandle with attack ads centering around the investigation as he tried to take him on in Florida’s 1st Congressional District.

Rebekah Jones, a former Department of Health employee who questioned the state’s COVID-19 data, won the Democratic primary for the seat in the heavily Republican district. A state inspector general’s report concluded Jones’ allegations were unfounded, but in her race for Congress, she tapped into national support for fundraising, bringing in more than $500,000.