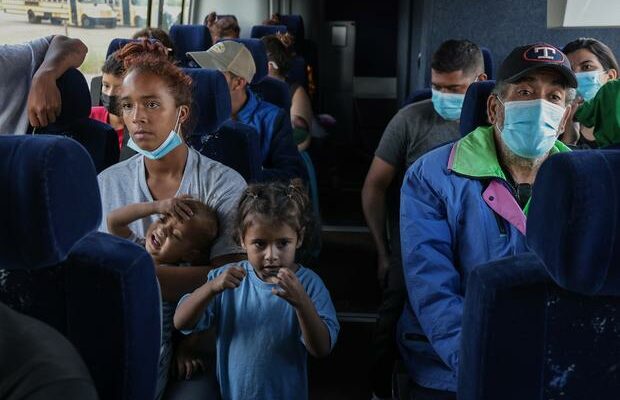 On Sept. 18, 2022, a bus full of people from Venezuela, Nicaragua and Cuba are shuttled away from Eagle Pass, Texas, by a group of volunteers from the League of United Latin American Citizens, as more asylum-seekers were wading through the mostly shallow waters of the Rio Grande from Piedras Negras, Mexico across the U.S. Southern border.  Miami Herald

Washington — Twenty Republican-controlled states filed a lawsuit on Tuesday asking a federal judge in Texas to halt a program recently unveiled by the Biden administration that would allow up to 30,000 migrants from four countries to enter the U.S. legally each month if they have American sponsors.

Announced by President Biden earlier this month as part of a new strategy to deter unlawful border crossings, the program allows eligible migrants from Cuba, Haiti, Nicaragua and Venezuela to live and work in the U.S. legally under a humanitarian immigration authority known as parole.The Biden administration has argued the program, coupled with increased expulsions of migrants who attempt to enter the U.S. illegally, will allow the U.S. to better manage the historic migration flows recorded along the southern border over the past two years.

Since the measures were announced in early January, the daily average of migrants apprehended after crossing the U.S.-Mexico border without legal permission has dropped by over 40%, according to internal government statistics obtained by CBS News.

But the coalition of states led by Texas alleged in their lawsuit that the sponsorship policy illegally expands the scope of the parole authority, which they argued can only be used in extraordinary cases. The states also said officials should have allowed the public to comment on the program before implementing it.

The policy, the states wrote in their lawsuit, “amounts to the creation of a new visa program that allows hundreds of thousands of aliens to enter the United States who otherwise have no basis for doing so.”

A decades-old power created by Congress, parole allows U.S. immigration officials to authorize the entry of foreigners who don’t possess a visa to enter the country on humanitarian or public interest grounds.

Representatives for the Department of Homeland Security, which oversees the sponsorship initiative, did not immediately return a request to comment on the states’ lawsuit.

Tuesday’s lawsuit is the start of the latest legal battle between the Biden administration and Republican attorneys general over the fate of U.S. immigration and border policy.

Republican-led states have successfully convinced federal judges, many of them appointed by former President Trump, to halt key parts of Mr. Biden’s immigration agenda over the past two years.

At the request of Republican attorneys general, the Supreme Court in late December prevented the Biden administration from lifting a Trump-era border restriction known as Title 42 that has allowed the U.S. to quickly expel hundreds of thousands of migrants, mostly to Mexico, on public health grounds. The high court is set to hear oral arguments in that case on March 1.

The revamped border strategy Mr. Biden unveiled this month includes an expansion of Title 42’s scope, as the Mexican government committed to accept up to 30,000 expulsions per month of migrants from Cuba, Haiti, Nicaragua and Venezuela who attempt to enter the U.S. illegally.

According to court records, the lawsuit filed Tuesday was assigned to U.S. District Court Judge Drew Tipton, a Trump appointee who has already blocked several Biden administration immigration policies at the request of GOP-led states, including a 100-day pause on deportations in early 2021.

The sponsorship policy announced earlier this month is modeled after two similar programs the Biden administration unveiled last year to allow American citizens and others in the U.S. to financially sponsor the arrival of Ukrainians fleeing the Russian invasion of their homeland and Venezuelans displaced by the socioeconomic crisis in the South American country.

Since those programs were announced, in April and October 2022, respectively, the U.S. has admitted more than 100,000 Ukrainians and 11,000 Venezuelans under the parole authority, according to government data.

American citizens and other individuals with a legal U.S. immigration status can apply to sponsor migrants under these programs if they pass background checks and demonstrate they can financially support the newcomers.