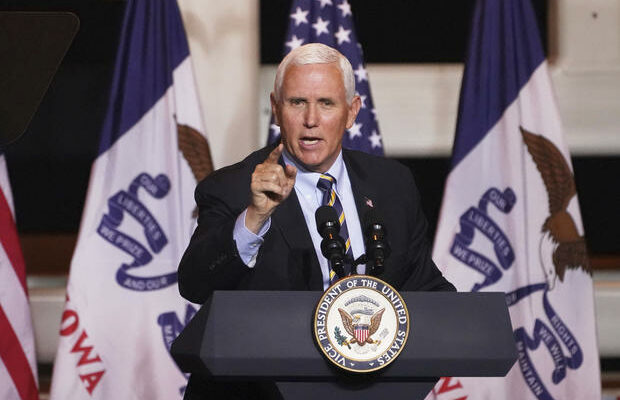 Vice President Mike Pence speaks during a Make America Great Again event in Carter Lake, Iowa, Thursday, October 1, 2020. Nati Harnik / AP
Vice President Mike Pence takes center stage next week when he debates Senator Kamala Harris for the only time in the campaign. While the debate is less than a week away, Pence stopped by Iowa on Thursday, a potential battleground state in this year’s election but also the state that hosts the first presidential election contest —  of 2024.

At a campaign stop in Council Bluffs, Pence touted the Trump administration’s record on trade deals, called for more tax cuts in the future, and warned that Joe Biden will be a “cheerleader” for China. Later in the day, Pence will speak at the conservative Family Leader Foundation’s 2020 Leadership Summit, which was pushed up from Thanksgiving to accommodate his schedule.

“We’re thrilled that he’s coming up for it, especially this close to the election,” Bob Vander Plaats, president and CEO of the Family Leader Foundation said. He added that 600 attendees are expected to turnout for the event.

While the 2020 Election is less than five weeks away, Pence’s fifth visit to Iowa this year, and recent appearances in the first-in-the-nation caucus state from several high profile Republicans, is already fueling speculation about the party’s potential standard bearer in a post-Trump presidency.

“Mike Pence is going to be on the A-list of potential contenders,” one senior Iowa Republican official said ahead of the vice president’s visit. The official added that when President Trump is no longer in the White House, the GOP will branch out to establishment, Christian Evangelical, Libertarian, and Populist-Trump wings.

“The strength (Pence) has is he’s going to be speaking to two of them. He’s going to have his feet in the Trump wing…and obviously the Christian Evangelical wing. He should have his feet firmly planted in both,” the senior Iowa Republican official said.

“What we see is a very deep bench,” said Vander Plaats. “There’s a host of them that’re probably looking at 2024 in one way or another,” he added.

The potential hopefuls are going to Iowa to campaign for fellow Republican Senator Joni Ernst and congressional races.
“They are all extremely careful and pretty adamant, I’m talking about adamant behind the scenes, when they talk to us that they are here to support either the President or (Sen. Joni Ernst) or the congressional candidates,” said Iowa Republican Party Chairman Jeff Kaufmann.

Pence has said that he hasn’t given “any thought to anything beyond the election in 2020” but win or lose, the November election will impact his future within the party.

Iowa political operative and former Republican state house representative Jake Highfill said if President Trump loses in November, the question will be whether Pence is too close to the fire. And if the president wins re-election, Pence’s challenge will be identifying his own lane for the future.

Highfill said Pence is “doing the right things” and “coalescing the base” by attending a social conservative event hosted by the Family Leader Foundation. “Our nominees are not determined by the average voter, they’re determined by the base of the party. And in Iowa, our base is pretty conservative,” he added.

GOP strategists describe Pence as a disciplined politician who can speak with blue collar voters about the economy and law and order while connecting with Evangelical voters over-pro life advocacy.

“The vice president just seems to feel more comfortable connecting with those voters and talking about his own faith and his own experience,” said longtime Republican operative Michael Steel, who served as press secretary for 2012 Republican vice presidential nominee Paul Ryan.

Steel said Pence’s true gift is his ability to deal with “the flurry of often contradictory or non-factual statements and tweets of the president” without showing any signs of displeasure.

That kind of unwavering loyalty to the president, as well as executive and legislative experience from his time as a governor and congressman, might give Pence an edge over other competitors in 20204.

“In some ways he kind of checks all the boxes,” Vander Plaats said, adding that “the best way to get a leg up” on the competition is to “do a great job at what you’ve been tasked.”

Senior officials close to the vice president maintain he is focused on the task of winning the November election.

“He feels the best thing he can do to serve the country right now is make the case why Donald Trump should be re-elected,” said Pence’s chief of staff Marc Short. “It would be hard to find a better emissary for the president than the vice president. He makes the case extremely well and their styles really do complement each other,” Short added.

Before the coronavirus pandemic put a stop to political rallies, Pence routinely embarked on bus tours across Midwestern states, including a three-stop trip in Iowa just days before the 2020 caucuses.

Since Mr. Trump held his first rally amid the coronavirus pandemic at the end of June, Pence has also been keeping an active travel schedule, making over 20 trips for political events — including six to Wisconsin and five to Pennsylvania. Short said in addition to Michigan, the vice president will continue to campaign extensively in Wisconsin and Pennsylvania during the home stretch.

Pence recently recalled traveling the country in the final months of 2016 and joked that tens of thousands showed up for then-candidate Trump, while “literally hundreds” came to his events.

In a year where COVID-19 has hampered the president’s popular rallies, some Republican strategists see Pence’s roundtables on anti-abortion, manufacturer tours, and police union endorsement events in battleground states as a crucial part of the campaign’s re-election blueprint.

“For Republicans who like the policies but are concerned about tone, and there are a lot of those voters, Pence is a really good advocate,” said Republican operative David Kotchel, who led Mitt Romney’s presidential campaign efforts in Iowa in 2008 and 2012 and advised Jeb Bush in 2016.

On the campaign trail, voters like 18-year-old Eddie Franco of Beaver County, Pennsylvania, say they appreciate Pence’s “classy” and “professional” approach. Franco said he enjoys listening to the vice president at campaign rallies because his style is different from the president’s.