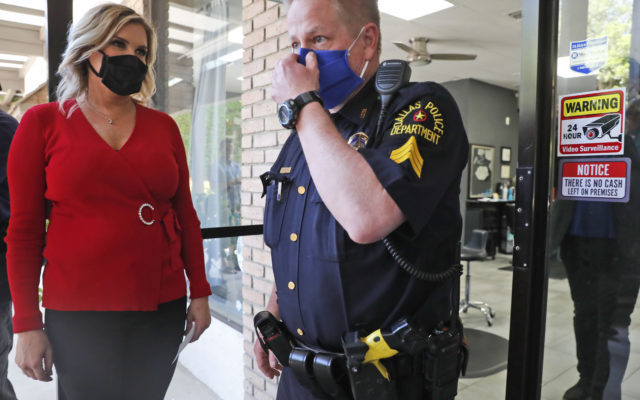 Amid concerns of the spread of COVID-19, salon owner Shelley Luther, left, holds the door open a Dallas police officer to leave the business after city officials cited her for reopening her Salon A la Mode in Dallas, Friday, April 24, 2020. Hair salons have not been cleared for reopening in Texas. Luther was asked to close and was issued a citation when she refused. Luther said she will remain open for business. (AP Photo/LM Otero)

Texas Lt. Gov. Dan Patrick said on Twitter he will be covering Luther’s $7,000 fine and will volunteer himself to be placed under house arrest so Luther can go to work.

7 days in jail, no bail and a $7K fine is outrageous. No surprise Texans are responding. I’m covering the $7K fine she had to pay and I volunteer to be placed under House Arrest so she can go to work and feed her kids. #txlege #TexansHelpingTexans https://t.co/gdtMLAHFV5

(Texas News Radio) — Texas Governor Greg Abbott and Attorney General Ken Paxton are both requesting a Dallas salon owner be released from jail after being locked up Tuesday for violating stay home closures.

Shelley Luther was sentenced to seven days in jail and fined $7,000 for operating her salon in violation of order by the governor, Dallas County, and the City of Dallas.

“I find it outrageous and out of touch that during this national pandemic, a judge, in a county that actually released hardened criminals for fear of contracting COVID-19, would jail a mother for operating her hair salon in an attempt to put food on her family’s table,” said Attorney General Paxton. “The trial judge did not need to lock up Shelley Luther. His order is a shameful abuse of judicial discretion, which seems like another political stunt in Dallas. He should release Ms. Luther immediately.”

The governor agreed in his own statement.

“I join the Attorney General in disagreeing with the excessive action by the Dallas Judge, putting Shelley Luther in jail for seven days,” Abbott said. “As I have made clear through prior pronouncements, jailing Texans for non-compliance with executive orders should always be the last available option. Compliance with executive orders during this pandemic is important to ensure public safety; however, surely there are less restrictive means to achieving that goal than jailing a Texas mother.”

Luther has said she had been working with the governor’s office on finding a way businesses like hers can open and operate safely amid the pandemic.