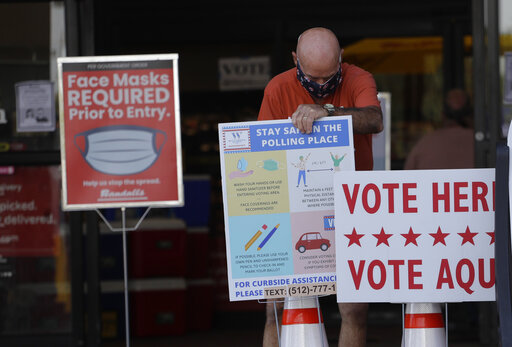 An election worker wearing a mask for protection against COVID-19 adjust signs for an early polling site located at a grocery store, Thursday, July 9, 2020, in Austin, Texas. (AP Photo/Eric Gay)
▶ Watch Video: CBS News poll: Biden leads Trump in Michigan and Nevada, race tied in Iowa
Texas has seen one of the highest upticks in newly registered voters in the nation, with over 3 million people who registered after the 2016 election.

That means about 1 in every 5 voters in Texas in 2020 were not registered in 2016 and Democrats are betting the surge could help flip Texas this year.

As of Monday, Texas’ secretary of state lists more than 16.9 million registered voters in its database, a state record and a net gain of 1.8 million since 2016.

While registration gains ebbed in March and April, at the beginning of the pandemic, more than 585,000 new voters have registered since September 1.

The Census Bureau says Texas’ population has grown by 3.85 million since 2010, 2 million of whom are Hispanic.

Texans aren’t required to designate a party when they register, but Democratic operatives anticipate at least 60% of these new voters are Democrats because so many of them are young and from communities of color.

“We think that population skews heavily Democrat,” said Luke Warford, the Texas Democrats’ voter expansion director. “And what that means is that’s going to translate to a lot of Democratic victories up and down the ballot in November.”

In the state’s 10 most-populated counties, the epicenters for these population hikes and shifting demographics, there have been more than 402,000 newly registered voters since January.

The state hasn’t elected a Democrat for president since 1976, but has tight polling margins consistent with other key battleground states. The latest CBS News Battleground Tracker has President Trump tied with Vice President Joe Biden, 49% to 49%, but still leaning Republican because of its electoral history.

The poll also shows that at least six out of 10 Hispanic support Biden, which is consistent with historic trends. About one-third of the Hispanic vote has gone to Republicans in the past decade.

A poll from the University of Texas/Texas Tribune released last week showed Mr. Trump leading Biden by a larger margin, 50% to 45%.

Since September 2019, the Texas Republican party says it has been able to register at least 160,000 likely Republican voters who have moved into the state, and they’re “confident” their outreach efforts will keep Texas Republican.

“These blue-state refugees simply need to be educated on the policy failures of their old homes. They don’t want to see Texas become like the San Francisco or Manhattan they fled,” said Texas GOP communications director Luke Twombly.

In June 2019, GOP super PAC Engage Texas started to ramp up Republican registrations. But by May, the group shuttered, citing the coronavirus as a reason.

The Democratic nominee has mostly stuck to virtual events to rally supporters, relying mostly on Texas-based surrogates. But on Tuesday, Jill Biden will be visiting Houston, Dallas and El Paso to mark the start of early voting. Joe Biden last visited the Lone Star State in early March, ahead of Super Tuesday.

The Trump campaign has been campaigning in person in Texas and surrogates have traveled to the state. Mr. Trump visited Texas multiple times this summer for White House official events and fundraisers, and Vice President Pence went to Dallas in June.

About $51 million has been collectively raised by candidates in the 10 battleground House races, the latest FEC reports note. In the races for the eight GOP-held or open seats the Democratic Congressional Campaign Committee is targeting, three Democrats are out raising their GOP opponents.

O’Rourke saw a tighter margin, losing by a slim 3,099 votes in this district. One of his former advisers, Sima Ladjevardian, is running as a Democratic nominee against Crenshaw.

Crenshaw, a former Navy Seal, is popular in the state and an effective fundraiser, raking in $9.26 million this cycle for his re-election. But on paper, the Houston-area district has seen the changing and diversifying demographics that Democrats are optimistic about. The 2nd District is entirely based in Harris County, which has seen an uptick of at least 60,000 registered voters since 2018.

“The dynamics of Harris County have completely changed,” Ladjevardian said. “It’s been years of tireless organizing — that is something that had been taking place in Beto’s race. But since 2018, I think everyone is understanding everything is on the line this time.”

Multiple organizations, from O’Rourke’s ‘Powered by People’ PAC to Voto Latino, have focused on voter registration efforts. Voto Latino announced Monday that it has registered 257,294 Texans for the 2020 election cycle.

Michael Adams, political science department chair at Texas Southern University, said Democrats have been winning the voter registration battle because of the enthusiasm generated by the House and Senate races on the ballot. Democrats flipped 12 state House seats in 2018, and are nine away from flipping the chamber altogether ahead of 2021 redistricting.

“I don’t think it will be a whole lot about who’s at the top of the ticket. I don’t see a lot of enthusiasm, to be honest with you, when it comes to Biden….I think the local ground game here is because of that interest and the excitement and anticipation in [the other] races,” Adams said. “They’re going to be pivotal.”

In July, Governor Greg Abbott authorized an extra six days of early in-person voting in Texas because of the COVID-19 pandemic, after rejecting calls to expand access to mail-in voting. Republicans tried to sue to block the extended period, but last week the Texas Supreme Court left the extended time frame in place.

There are ongoing legal battles over Abbott’s recent order limiting mail-in ballot drop-off sites to one per county. On Friday, a federal judge blocked his order, but the Fifth Circuit Court of Appeals put the order back into effect the next day, meaning the limit is still in place.