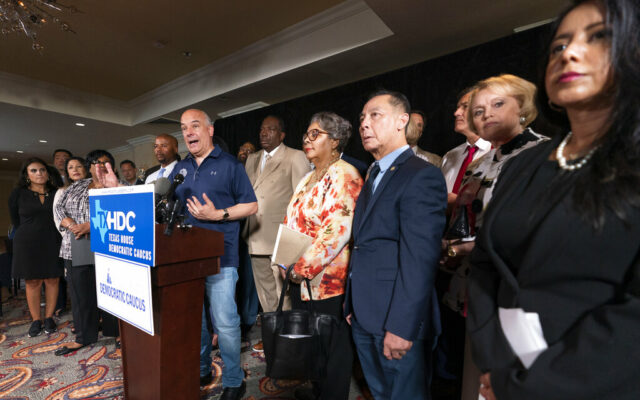 Rep. Trey Martinez Fischer from San Antonio was among Texas House Democrats who tested positive in Washington D.C. Sunday. He said he is quarantining until he tests negative and is” only experiencing extremely mild symptoms.”

“Just as these new variants sweeping the country are more aggressive than ever, the wave of anti-voter legislation in this country is worse than we’ve seen in generations. That’s why, I will continue the fight for voting rights with every single fiber of my being. I will be tele-working with my colleagues, staff, partners, and allies. We’re planning more good trouble, and hope to make announcements soon. Democracy is in jeopardy, and we will not be stopped in our fight to protect it,” Fischer said.

Rep. Celia Israel from Austin also announced she test positive for COVID-19 Sunday via social media. The remaining three Democrats from Texas who tested positive were not identified Monday morning.

Yesterday, I tested positive for COVID-19. What this highlights is the risk every @TexasHDC member continues to face to defend the state we love and the Texans we represent.

Despite my setback, I will continue to push forward and fight for every Texan to have their voices heard

“We will continue to be here until we can bring voting rights and bring an American voting rights standard to the country to save our democracy,” Fischer said.

Texas House Republicans said they are continuing to hold regular meetings and briefings on the eleven action items Texas Governor Greg Abbott identified as the focus for the legislative special session including the voting and elections security measures that Democrats are protesting.

House Democrats have seen blistering commentary from Republicans over the last week, including calls from Abbott to return to be arrested and “cabined inside the Texas Capitol until they get their job done,” but have received support from Democratic constituents federally and within the state.

“I remain committed to protecting every Texan’s sacrosanct right to vote and to supporting the practices that have enabled Texas to successfully administer fair, honest and secure elections,” Texas Senator Judith Zaffirini said. “Accordingly, I stayed in Texas to represent my constituents at the Capitol and to strongly support my colleagues who chose to voice their opposition to this restrictive voting bill by leaving the state.”

To curb the standstill in the Texas House, Lt. Gov. Dan Patrick wrote to Abbott last week asking the Governor to change the state’s quorum requirements to a simple majority from the current two-thirds rule at the next special session.

#ICYMI: I've asked Gov. @GregAbbott_TX to add changing the quorum requirement to the call. Should be simple majority, like it is in most states to stop outrageous behavior by Dems. I’m confident voters will support the #SimpleMajority.#txlege #SpecialSession pic.twitter.com/qLBatkefn2