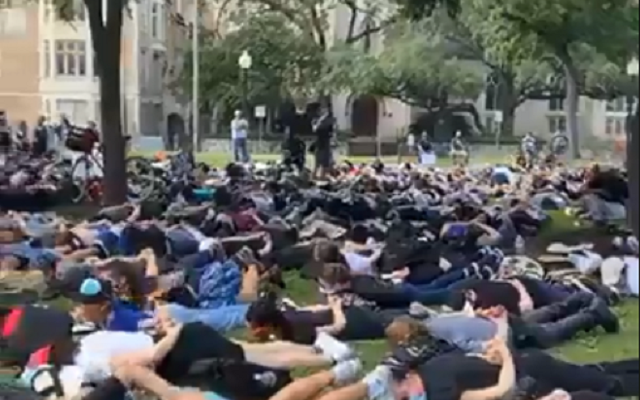 The crowd peacefully walked to Travis Park chanting “Black Lives Matter” and “Justice for George” as some drivers who were brought to a stop honked their horns and waved or gave a thumbs up to the protesters.

As they arrived at the park, they conducted a “die-in.”  Lying face down on the ground with their hands behind their backs, they chanted,”I can’t breathe.”  It was a reenactment of  Floyd’s death as officer Derek Chauvin pressed his knee on Floyd’s neck.

The fifth day of protests in downtown San Antonio came hours after the announcement in Minnesota that three more Minneapolis police officers have been charged in Floyd’s death, and the charge against Chauvin was upgraded to second-degree murder.

Roger Mortensen, who has participated in the protests in San Antonio for five days, said he was pleased to hear the news.

While saying he does not condone looting or rioting, he doubts the officers would have been arrested and charged without the demonstrations and the outrage that have rocked the country.

“I think the amount of violence that is currently occurring, as well as the amount of money it’s costing these cities to replace their things became more of the problem for them than charging these officers.  That’s why I feel that these officers were charged,” said Mortensen.

Will the demonstrations stop now?  Mortensen doesn’t think so.  He says the fight for justice for other people of color who have died unjustly will continue.  It doesn’t end with the George Floyd murder case.

Trevor Taylor, a teacher at Wagner High School in the Judson School District, gave a tearful impromptu, impassioned speech at Travis Park.  Some in the crowd also were brought to tears when Taylor described how he felt during the die-in as he chanted, along with the others, “I can’t breathe.”

“When I see this, I can’t help but think about the people I love, and how easily it could have been one of them,” he said.  “So I stand up with you and I’m fighting with you because I can’t do it alone and you can’t either.”