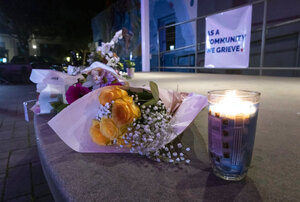 Flowers and candles lie at a memorial for victims of the mass shooting a day earlier, in Half Moon Bay, Calif., Tuesday, Jan. 24, 2023. (Carlos Avila Gonzalez/San Francisco Chronicle via AP)

HALF MOON BAY, Calif. (AP) — Prosecutors say they will charge a farmworker accused of killing seven people in back-to-back shootings at two Northern California mushroom farms with seven counts of murder and one count of attempted murder.

It was not immediately clear whether Zhao had an attorney who could speak on his behalf.

Authorities believe Zhao acted alone when he entered a mushroom farm in Half Moon Bay and opened fire, killing four and leaving another seriously wounded, San Mateo County Sheriff’s officials said. He then drove to another nearby farm where he had previously worked and killed another three people, said Eamonn Allen, a sheriff’s spokesperson.