A cool discovery while getting my disc fix. A reminder of KTSA’s days as THE rock station in San Antonio 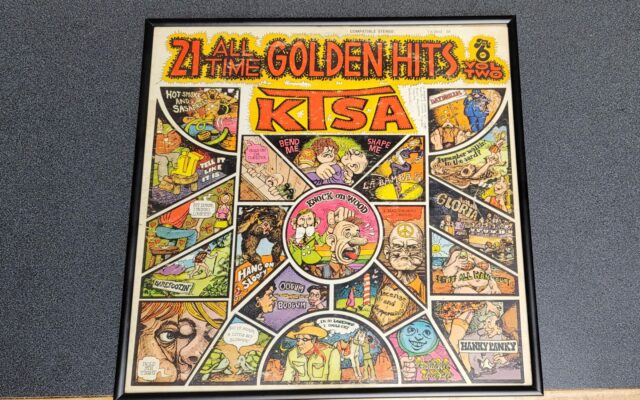 I’m in the latter category. I’ve been collecting records for nearly 50 years.

It started innocently enough. I was 6 and one of my uncles gave me a dollar for doing so well on my 1st grade report card.

The next day, I plopped myself in the back seat of my mom’s Pontiac Catalina for her weekly trip to Mammoth Mart, the department store located about a mile from our house in Connecticut.

My mom would usually make her way through the store, grabbing whatever she needed wile taking the occasional moment to give me an opportunity to look at something that caught my attention.

The answer was quite often “No! You just had your birthday” or “No! Christmas is coming.” or “No! You ATE today!”

But that day was different. I had my OWN money and that dollar bill was burning a whole in the pocket of my Toughskins jeans.

We eventually arrived at the always exciting toy department and I immediately ran to the rack of Hot Wheels cars.

Pretty good recall for something that happened 48 years ago, right?

But I don’t remember why I ended up leaving the Hot Wheels display and standing in front of a giant shelf packed with 45 RPM records.

I was fascinated with the colorful labels and the pictures of the performers on the sleeves.

I may have asked my mom how much they cost before I held up one that I wanted.

It was ABC by The Jackson 5.

We walked to the cash register and I handed the clerk the dollar bill that was in my possession for less than 12 hours.

My parents had one of those giant wooden console entertainment systems in the living room. With the color TV screen in the front and a door on top that you rolled back to reveal the record player, AM/FM radio and 8 track player.

It was the length and weight of a Chevy Vega and I operated it with the skill of a mission control operator at NASA. I had to, we didn’t have a remote control.

I WAS the remote control!

I place my new acquisition on the turntable and in a few seconds, the happy sounds of Michael and his brothers are filling the room.

Before that day, my music selections were limited to my parents Elvis Presley, Creedence Clearwater Revival and Buddy Holly albums. I think they had a couple of Sam Cooke and Motown records as well.

But this one is MINE! I listened to it until the vinyl turned white.  (Same thing happened to Michael 15 years later!)

Now I am hooked. Every penny is saved until I have the 78 cents needed to buy another record.

One day, I encounter a yard sale where a lady sells a whole box of records for 2 bucks.

My little hobby expands to the point where my bedroom closet is no longer where I keep my clothes. It’s packed with records.

I would discover a new artist and begin tracking down their entire catalog.  Sometimes it takes years but the hunt is crazy fun for me.

A bit expensive at times, but definitely fun.

I visit record stores, pawn shops, garages, storage sheds and attics to find the one record I really want.

It’s an activity I still take part in. Trust me, crawling through a cramped dirty room or sitting on a floor for hours at a time while trying to land a choice record was a LOT easier when I first started this hobby.

When I moved to Texas from Maine in 2013, I had to unload about 95 percent of my record collection. I sold most of them. Others I gave to friends who shared my passion. The records I brought with me were typically gifts I received over the years or something that I had a hell of a time tracking down.

While parting with my platters…kinda sucked, I have been able to rebuild my collection since settling down in San Antonio. I’ve replaced most of what I had to leave behind and it has been a LOT of fun. I have met many other record collectors in the 8 years I’ve lived here.

They share their favorite spots to find cool records and I spend many weekends diving into stacks of vinyl. (Stingray Records in New Braunfels is my personal favorite.)

Even though I have all of the records I really want, I still love looking through the racks.

About a month ago, I am flipping through a good sized lot of albums at a flea market. I’m not searching for anything in particular and I stop to look at a cover that catches my eye.

Then in big red letters:

These collections were pretty common at that time. The big radio stations in cities across America stick their call letters on record albums so kids see them at record stores. I have some that were put out by some East coast stations. They usually include a few hits by artist who are from the region.

Texas is well represented in this KTSA collection.

Johnny Nash and BJ Thomas are from Houston.

Jon & Robin are from Dallas.

San Antonio’s own Bubble Puppy have a song on here as well.

The record is in terrible shape but the cover is cool and holding up well for some 54 year old cardboard.

I decide to buy is, since I am 100% certain we don’t have a copy of it here at the station.

The guy wants 10 bucks, I talk him down to 6 and I am now the proud owner of a seriously scratched up piece of plastic.

I head to Hobby Lobby for a frame (which cost more than the record) and for now it is displayed in the KTSA news room.

2022 marks KTSA’s 100th year on the air and it is a wonderful reminder of when rock and roll was king and this station ruled.