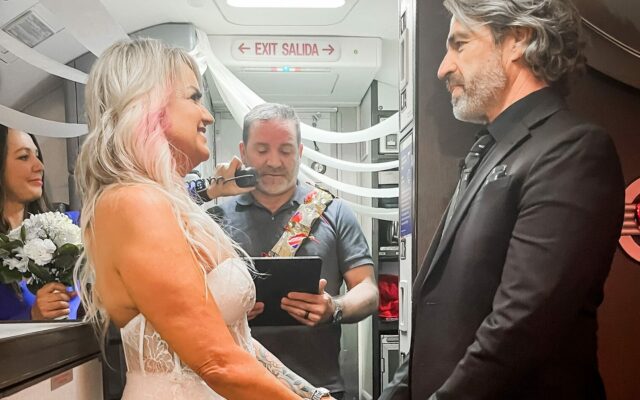 Southwest Airlines shared the uplifting story of Jeremey and Pam, two travelers from Oklahoma City, who decided last week to fly on a whim to Las Vegas to exchange their vows and booked an appointment for Sunday night. The pair needed to get legally married in the United States ahead of their scheduled destination wedding in Mexico over the Summer and April 24, 2022, just felt right.

The details all fell in to place. Pam told ABC 15 they purchased the plane tickets and ordered her dress online on Tuesday, received the dress in the mail on Thursday, got it altered on Friday and the couple traveled to the Dallas Fort Worth International Airport on Sunday with plans to get married later that day.

With their luck seemingly run out, Jeremy and Pam found themselves mired in weather-related delays until their flight to Las Vegas was eventually canceled.

As the couple commiserated, another traveler headed to Vegas named Chris overheard Jeremey and Pam discussing the situation and encouraged them to follow their heart.

Chris, an ordained minister, offered to marry the couple himself in Vegas and the three bought the last remaining tickets for the Southwest Airlines flight to Vegas out of Dallas Love Field. After an Uber trip across town, the trio reportedly boarded flight 2690 with minutes to spare.

Southwest Airlines Pilot “Captain Gil” asked the couple why they were in full wedding attire and offered to have the couple married on the flight after hearing their story.

Southwest Airlines said flight crew pulled out all the stops as quickly as they could including toilet paper streamers, a snack mix sash for the officiant to wear, downloading ‘Here Comes the Bride’ to be played over the speaker and opening the ceremony. A flight attendant named Julie stood in as Pam’s Maid of Honor, a professional photographer on board pulled out her camera from her carry-on luggage and documented the ceremony, and another passenger passed around an old notebook turned guestbook that was signed by the whole cabin with sweet messages and signed with names and seat numbers.

“A lot of them said ‘thank you for letting us be a part of it…we need this kind of stuff,'” said Jeremy told ABC 15. “Somebody said, ‘Man, I feel like I just watched a rom-com movie.'”