A defining image: Rittenhouse nearly crumbles out of picture 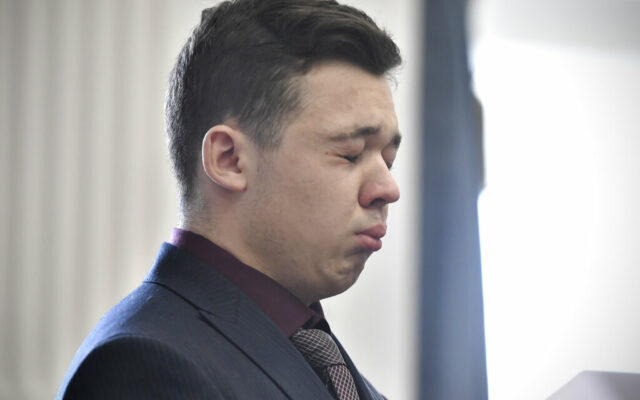 Kyle Rittenhouse closes his eyes and cries as he is found not guilt on all counts at the Kenosha County Courthouse in Kenosha, Wis., on Friday, Nov. 19, 2021. The jury came back with its verdict afer close to 3 1/2 days of deliberation. (Sean Krajacic/The Kenosha News via AP, Pool)

NEW YORK (AP) — As the last of five “not guilty” verdicts were read aloud on Friday, Kyle Rittenhouse shook with sobs and collapsed, nearly falling out of sight of the television camera fixed on him in a Wisconsin courtroom.

It was instantly the defining image of the 18-year-old’s murder trial, which became such a subject of passionate debate about guns and justice that major broadcast and cable news networks set aside regular programming to reveal the jury’s decision.

There was no shortage of strong opinions in the verdict’s wake.

“I knew this case was big,” Rittenhouse’s lawyer, Mark Richards, said after the trial during a news conference carried live by the cable networks. “I never knew it was going to be this big.”

Rittenhouse’s shooting of three people, including two he killed, during protests over racial injustice in Kenosha made him either a vigilante who was out to make trouble or a young man who defended himself from a mob, depending upon an observer’s perspective.

Following the verdict, some commentators sought to separate that debate from the mechanics of the trial.

“You were seeing this play out in America online in a very different way than it played out in court, when you were watching every single detail,” said Sara Sidner, a CNN reporter.

On Court TV, Kirk Nurmi offered the view you’d expect from a network where lawyers predominate, saying the jury’s verdict “should be sacrosanct, regardless of what the court of opinion thinks.”

Commentators Andy McCarthy and Jonathan Turley on Fox News Channel both decried how opinion had overshadowed news in the coverage of Rittenhouse’s case. McCarthy, a lawyer, said people were losing faith in the idea that they have news coverage they can rely upon.

Turley noted how his job had changed.

“Up until recently, legal analysis was not part of the advocacy journalism model,” he said. “Whatever was happening with commentary, that stood apart. That changed in this case.”

Fox News anchor John Roberts introduced Turley’s analysis by saying that many people in the country had “convicted Kyle Rittenhouse before he got anywhere near a courtroom.”

Roberts read tweets, some nearly a year old, that were critical of Rittenhouse. He asked McCarthy: “What does this say about the rush to judgement by, in large part, politicians and by what was supposed to be a respectable media going into this thing?”

Some of what McCarthy voiced was evident in the choices made by networks covering the aftermath. Fox brought on David Hancock, described as a Rittenhouse family friend, to praise the verdict and say Kyle “weathered a hell of a storm this past year, a hell of a storm.”

At roughly the same time, MSNBC was reading a statement issued by the family of one of the men Rittenhouse killed.

“Not everyone is going to feel this was just,” CNN’s Sidner said. “There are two people who are dead.”

On NBC News, commentator Eugene Robinson said that in a country where guns outnumber people, “what concerns me is that the result will be seen as a vindication of vigilantism, to the extent that it legitimizes this line of thinking.”

News networks had followed the trial sporadically over the past few weeks, most closely when Rittenhouse took the stand in his own defense. For outlets where legal news dominates, it attracted strong attention: Court TV’s viewership during the first two weeks of the trial was up 42% than the networks’ average for the previous four weeks. The Law & Crime Network said it had more viewers on YouTube for Rittenhouse’s case than when Derek Chauvin was tried for George Floyd’s murder.

Amid the televised trauma, lawyer Richards stood out for expressing a relieved wish for his upcoming weekend. He said he was looking forward to attending Wisconsin’s Big 10 football matchup against Nebraska on Saturday.

“Can I go home?” he said as reporters exhausted their questions.

Find AP’s full coverage of the trial of Kyle Rittenhouse at: https://apnews.com/hub/kyle-rittenhouse