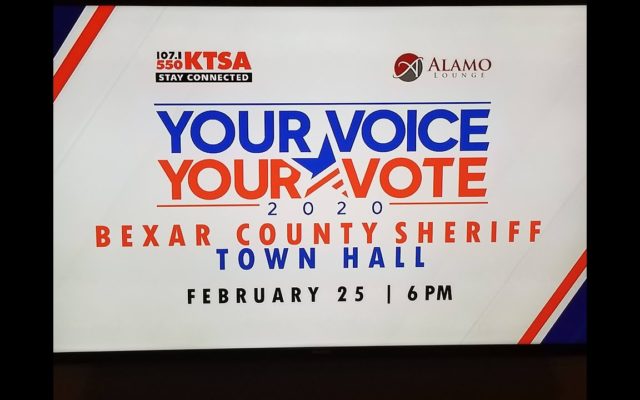 Sheriff Javier Salazar and six of his seven Democratic and Republican challengers joined us in the Alamo Lounge and on KTSA AM/FM.

The BCSO has made national news with Barney Fife-sized goofups at the jail. Some deputies say morale in the department could be better.

She also says she has not faced actual charges. Indictment means you have been formally, actually charged.

The other interesting issue is the still-unsolved Nichole Olson triple murder, why the length of investigation, and why the FBI?

With all respect to the victims and the families, is this an especially complicated case? Or is there a lot of “CYA” going on?

Now, I’ll be the first to admit that I’m not the most exciting showman in a setting like that. I do what I can.

But I’ve hosted a lot of different candidate debates and forums, and the pols are really the show. That audience was not feeling it.

Looked to me like Sheriff Salazar did himself no harm, but not much else.

The other candidates, mostly unknown (and one who’s known for all the wrong reasons), didn’t make much of an impression