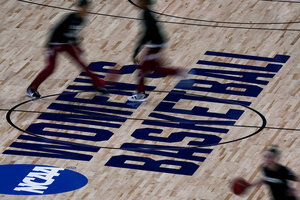 FILE - Stanford players, top, and a Utah Valley player warm up before their college basketball game in the first round of the women's NCAA tournament at the Alamodome in San Antonio, in this Sunday, March 21, 2021, file photo. Arena branding was among the differences people noticed between the NCAA's two biggest events, the women's and men's basketball tournaments. (AP Photo/Charlie Riedel, File)

SAN ANTONIO (AP) — The NCAA women’s basketball committee has revealed the 11 officials who will work the Final Four and championship game of the tournament.

The names were released Thursday, the first time the group had been announced the day before the national semifinals.

“It’s long overdue with officials being such an integral part of the game,” said Penny Davis, the NCAA coordinator of officials. “They deserve the same accolades for their hard work and to be honored for this achievement. It goes in alignment with our strategic plan. Growing officiating is part of that. This helps humanize us and recognize and honor the work they’ve done getting to this elite stage.”

Included in the group is Dee Kanter, who will be working in her 24th Final Four and Maj Forsberg, who will be an official in the Tokyo Olympics this summer

The officiating assignments for each semifinal game Friday night, as well as Sunday night’s national championship game, will be announced an hour before each game.

Davis said the officials were chosen after being evaluated for every game in the tournament.

“There are standards in place to be in this realm and in consideration,” she said. “We have performance standards we review. Mechanics, signals, play calling, accuracy, rules enforcement, points of emphasis performance.”

Davis said that each game has nearly 200 decision points.

The basketball selection committee has the final say on who officiates the final games based on recommendations from Davis and her staff.

ESPN will have a female producer for the Final Four for the first time in the history of its production of the tournament with Kerry Callahan taking over this year. Callahan has been at the network for 20 years, starting out as a production assistant and working her way up to this point.

“This event has always been important to me and it’s been something I’ve been a part of for a long time,” She said. “It’s been a goal of mine to get to and produce this championship with this event.”

Callahan has been in San Antonio since the start of the tournament even when the announcers were working remotely.

“That was challenging,” she said. “our production was here, but the announcers were remote. Things like the first two days being triple headers for production crews and we were switching announcing crews between games. That’s not the norm.”

Callahan started at ESPN in 2000 and has started producing the early rounds and regionals for the past decade.

No. 3 UConn freshman Aaliyah Edwards is easy to spot on the court with her long purple and gold braids flying around as she fights for every rebound or battles for position under the basket.

But her hair is not just a style statement.

It’s a tribute to her late brother Jermaine, who helped teach her the game and shared a love of the Los Angeles Lakers and Kobe Bryant. Jermaine, who also played college basketball, at St. Lawrence College in their hometown of Kingston, Ontario, died suddenly in 2017 at the age of 27.

“I always know that he’s above watching over me,” Edwards said. “Mentally, I kind of think to myself like, ’What would he say in this scenario or what would he think about what I’m doing for this game,” she said. The little sister said she also knows Jermaine would be proud of her play and if he was still alive, “He’d definitely be hyping me up.”

Stanford needs one more victory to play in the national championship and a shot at another piece of history on a very special anniversary.

Sunday is the 125th anniversary of the first collegiate women’s basketball game between Stanford and California in 1896 in San Francisco. Stanford won that game before the sport was discontinued in 1899 reportedly for the students’ health.

Stanford coach Tara VanDerveer said that date has been brought to her attention, and she’s seen pictures of the uniforms and the ball.

“So we’ve come a long way,” VanDerveer said. “But we also know that we have a long way to go. And maybe this Final Four will be kind of a look back at the historical, but also look forward of just the direction our game is going with again, great young coaches..”