A Halloween Tale: Longhorns football, a pole dancer and her monkey 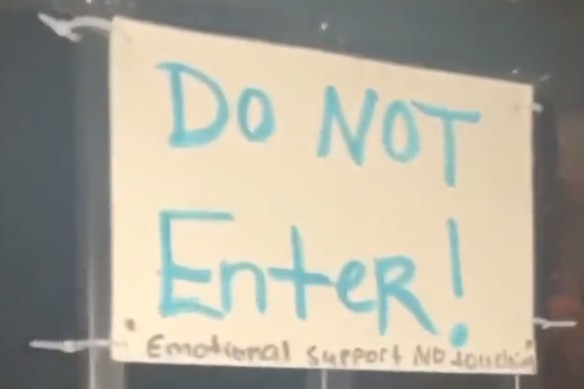 SAN ANTONIO (KTSA News) — The wildest Halloween story that has taken the internet by storm involves one University of Texas Longhorns coach, a pole dancer with credits that include Jerry Springer, a monkey and a haunted house.

The story has been pieced together with receipts thanks to internet sleuths and the tall tale begins with a Tweet by Houston-based photojournalist Tom Campbell on Monday. Campbell has been published in ESPN, SB Nation and USA Today.

Campbell holds a journalism degree from Texas A&M and this story almost sounds like something only an Aggie would cook up about the Longhorns, but he and other Twitter users delivered what appears to be credible proof.

Campbell said that he had heard a report “from a credible source” that Longhorns’ coach Jeff Banks’ has a pet monkey that allegedly attacked and seriously hurt a trick-or-teater. Banks serves as assistant head coach, special teams coordinator and tight end coach at the University of Texas.

“The monkey’s jaws apparently had to be pried off the small child,” Campbell reported and followed up with a screenshot from the neighborhood-focused social media app Next Door by a woman named Danielle Banks letting the neighborhood know about a haunted house, maze and party.

Danielle Banks is actually Danielle Thomas, Jeff Banks’ girlfriend, who used to go by the pole dancer stage name Pole Assassin. Thomas was prolific enough as a dancer to score a stint on the famously ostentatious Jerry Springer show in November 2017.

@Pole_Assassin = #GOAT!!!! Is this the greatest pole dancer to ever hit our stage? #JerrySpringer pic.twitter.com/TJvM8yu3qE

According to Sports Illustrated, Thomas took to her now-deactivated Twitter account to defend her boyfriend and clear up some misconceptions.

Thomas clarified the monkey, a white-faced capuchin, is actually hers and goes by the name Gia. The duo performed together when Thomas was a pole dancer and the pair even have their own Instagram page.

Thomas reportedly admitted on Twitter that she had set up a haunted house in her front yard and that one of the visiting children had ventured away from the attraction and to the area where the monkey lives.

In a now-deleted video, Thomas retraces the steps the child would have had to take to end up at Gia’s enclosure. Another Twitter user uploaded it with the hashtag #MonkeyGate.

“I had a haunted house on one side gated off/ he had no permission to go pass the gate i had no idea he went in my back yard,” Thomas tweeted prior to deleting her account. “neither did i know anything about a bite ! Until a doctor of neighborhood told me the treat a small bite. No parent have contacted me about it !”

“A 11 /12 year old child should know better then to enter someone yard without permission and old enough to also follow the rules. The rules were when u get to the gate turn around and come back out for candy every other parent and child did so !” another Tweet by Thomas read.

The Austin American Statesman reported that Austin Animal Services is investigating the reported monkey bite. The University of Texas has not responded to a request for comment.

The pole assassin is trending which is a perfect time to reveal that one time when Jeff Banks got me mixed up with one of his side pieces at 4AM. All those trips to Cali and Arizona on A&M’s dime didn’t pay off with any big time prospects but apparently a lot of monkey business pic.twitter.com/H4l6Cd7Bm5