A look at buyers and sellers from busy MLB trade deadline 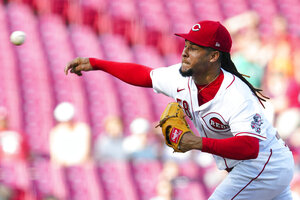 This is quite a time to be a season ticket holder for the San Diego Padres.

Great weather, a jewel of a ballpark — and perhaps the most exciting lineup in baseball for the near future.

The Padres landed the biggest prize of this year’s trade deadline — and maybe at any year’s deadline — when they acquired outfielder Juan Soto, a 23-year-old superstar who isn’t due to become a free agent until after the 2024 season. To get him, they had to send six players to Washington, including several of their top recent prospects.

It’s a massive move for an organization that has never won a World Series — but now adds Soto to a team that has Fernando Tatis Jr., Manny Machado and Yu Darvish. San Diego also traded for closer Josh Hader this week.

Here’s a look at the biggest buyers and sellers at this year’s deadline, and how they’ve reshaped their futures.

Analysis: It was going to take a big offer to pry Soto loose from the Nationals, and the Padres always made some sense as a destination. They had enough attractive prospects to make the deal happen — and because they were already postseason contenders, adding Soto can benefit them even if he only stays through 2024. Bell brings power to the lineup as well.

Analysis: Chasing their first postseason berth since 2011, the Phillies added help in the rotation, the bullpen, the infield and the outfield. Philadelphia moved on from Moniak, the top pick in the 2016 draft.

Analysis: Speaking of postseason droughts, the Mariners haven’t qualified since 2001, and they approached this deadline with a sense of urgency, sending three of their top prospects to Cincinnati for Castillo. Boyd had some good moments in Detroit but didn’t pitch at all this year for San Francisco because of elbow problems.

Analysis: Considering what Seattle gave up for Castillo, the Yankees probably feel pretty good about landing Montas, who had a 3.18 ERA in 19 starts this year for Oakland. Benintendi and Bader give New York more outfield options, although the latter has been dealing with foot problems.

Analysis: Lopez and Fulmer can help Minnesota’s bullpen, and Mahle has been solid over the past couple months for the Reds. And none of the Twins’ top AL Central rivals did anything all that special at the deadline.

Analysis: It’s one thing to trade a star for prospects. It’s another to give up a generational talent who was under team control for another couple years. If Soto’s career proceeds as expected, there may always be questions about whether the Nationals tried hard enough to keep him. That said, Washington received plenty in return. Hassell immediately becomes the team’s top prospect, according to MLB Pipeline. Abrams and Gore are both top-six draft picks who made their big league debuts this year.

Analysis: The Reds cashed out with Castillo, acquiring Marte and Arroyo, who are ranked as the No. 17 and No. 92 prospects by MLB Pipeline. Cincinnati now has six of the top 100.

Analysis: The 24-year-old Waldichuk was the top prospect the A’s received. He was excellent at Double-A this year and has posted a 3.59 ERA in 11 starts at Triple-A.

Analysis: The Orioles were in a tricky spot, because although they’ve been rebuilding, they’re also surprisingly in contention for a wild card after two good months. Trading Mancini wasn’t the sentimental move, but he can become a free agent after this season, so a breakup might have come soon anyway. Lopez was Baltimore’s closer, but its bullpen has been very good this year and may be able to withstand his departure.