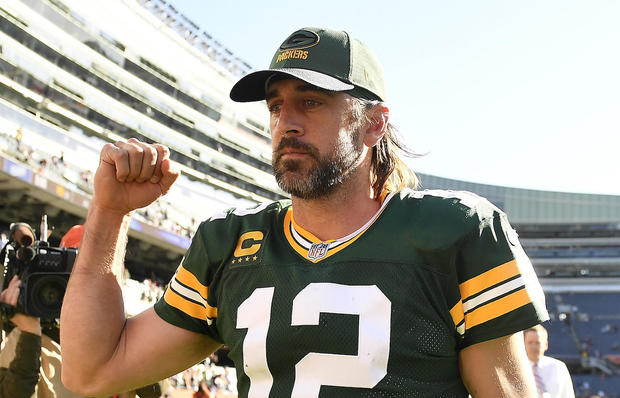 Green Bay Packers quarterback Aaron Rodgers confirmed he’s unvaccinated just days after testing positive for COVID-19. In a new interview, Rodgers, 37, lashed out at the media, NFL COVID-19 protocols and said he consulted with podcaster Joe Rogan for alternatives to the vaccine.

“I realize I’m in the crosshairs of the woke mob right now, so before my final nail gets put in my cancel culture casket, I think I’d like to set the record straight on so many of the blatant lies that are out there about myself right now,” Rodgers said in an interview with “The Pat McAfee Show.”

“I believe strongly in bodily autonomy, and the ability to make choices for your body, not to have to acquiesce to some woke culture where a crazed group of individuals who say you have to do something. Health is not a one-size-fits-all.”

After testing positive, Rodgers will miss Sunday’s game against the Kansas City Chiefs. He’s now required to sit out team activities for the next 10 days.

Rodgers said he began feeling symptoms on Tuesday, tested positive Wednesday, and had one difficult day before feeling better on Friday. After speaking with Rogen, he began taking several unproven remedies to fight COVID, including ivermectin, a drug typically given to animals to fight off parasites.

The CDC has issued multiple warnings against using ivermectin to treat COVID-19, which can cause nausea and vomiting to more severe seizures, coma and death in the event of an overdose. Poison control centers across the country have seen an increase in calls related to ivermectin-related calls since the drug became popular.

Rodgers also discussed his comments from August when he said he’d been “immunized.” He said he had taken a homeopathic “immunization protocol” advised by a medical team.

Rodgers also expressed skepticism in the COVID-19 vaccines, citing unproven claims they could affect fertility. The claim, which was echoed in September by rapper Nicki Minaj, has been flagged as misinformation by the CDC.

“The answer to that is a resounding no,” Dr. Anthony Fauci said in September when asked if the vaccines could cause infertility. “There’s no evidence that it happens, nor is there any mechanistic reason to imagine that it would happen.”

Rodgers claimed he received conflicting medical advice from NFL doctors, with one saying, “it was impossible for a vaccinated person to get COVID or spread COVID.” The NFL said no infectious disease consultants working with the league have spoken with Rodgers and would not have said this.