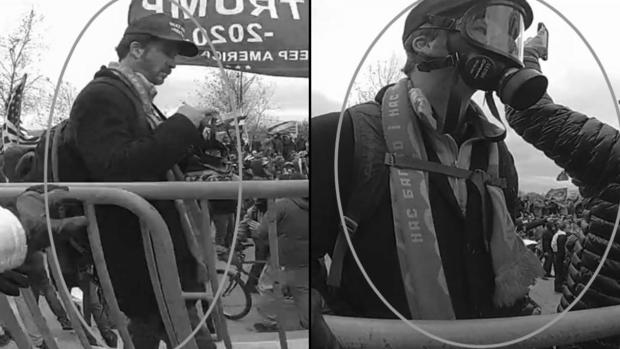 Moscow – Evan Neumann, whose participation in the January 6 attack on the U.S. Capitol landed him on the FBI’s Most Wanted List, has accused American authorities of going “back to the Middle Ages” and abandoning the rule of law in their handling of ex-President Donald Trump’s supporters.

Neumann fled prosecution in the U.S. by traveling to Europe, eventually making it into Russian-allied Belarus, where he’s now appeared on state-run TV to complain about his home country’s leadership and make his case for “asylum” in the nation often dubbed Europe’s last dictatorship.

In a special broadcast late Thursday night on Belarusian state TV, Neumann spoke of a grueling journey through the forests near the Chernobyl exclusion zone to get into Belarus. He wants Belarus to grant him political asylum to avoid criminal prosecution back at home on six charges related to the January 6 attack on the U.S. Congress.

In court files, the FBI said Neumann spent around four hours at the Capitol during the riot and verbally and physically abused police officers, including “forcefully shoving [a] metal barricade” into a line of officers before breaking into the building.

Neumann initially sought refuge in the Ukrainian city of Zhytomyr, but claims he was followed by local law enforcement — likely, he said, on U.S. orders.

“The FBI found out which country I went to and what city I was in, and then, just two weeks later, I was told that the Ukrainian police were looking for me in Zhytomyr,” Neumann told Belarusian TV. He said he then fled the country “wearing one set of clothes with a thousand dollars” on him.

“I know that Belarus resists the West. Besides that, your country was closer to me than Russia,” Neumann said, explaining his decision to a Belarusian reporter.

Neumann has asked the country’s longtime ruler Alexander Lukashenko to offer him formal government protection, to keep him from the reach of American law enforcement.

The 48-year-old owner of a small company bemoaned “political repressions” in the U.S. and claimed that he would face torture if he was sent back to the U.S.

“What they do to people like me? They keep you in solitary confinement for eight months, beat you. Torture is common,” Neumann said, later adding with a smile. “I’m not strong enough to withstand torture.”

There have been no allegations of torture leveled by any of the January 6 rioters detained in the U.S., but the lawyer for one man who was sentenced this week for assaulting a police officer has claimed “repugnant” conditions in the Washington, D.C., jail where he’s been held, including purported threats of violence.

Neumann’s interview, which aired on Belarus’ most-watched, state-run channel, was likely welcomed by the Lukashenko regime as useful propaganda as Belarus remains locked in a diplomatic standoff, with increasingly dire security implications, with the West.

Lukashenko, as well as his closest ally, Russian President Vladimir Putin, have repeatedly used the attack on the Capitol and American officials’ response to it to criticize U.S. democracy. Both have accused Washington of having “undemocratic” double standards, as the U.S. routinely criticizes Russia and Belarus for their authoritarian tendencies while prosecuting the Capitol rioters, who are routinely characterized by media in Moscow and Minsk as protesters.

Last year, Belarus was engulfed in mass protests after a presidential election that the outside world saw as deeply flawed, but in which Lukashenko claimed a resounding victory. Many Belarusians and outside observers said the outcome was falsified, believing Lukashenko’s main opponent, Svetlana Tikhanovskaya, really had an advantage and likely won. That outcome would have ended Lukashenko’s 26-year rule.

To quash the monthlong unrest and silence his opponents, Lukashenko launched a brutal crackdown on protesters, activists and independent journalists, permitting law enforcement to use the harshest methods. Thousands ended up in detention centers, many later recalled callous beatings, torture, and even rape while in state custody.

To solidify his grip on power, the Belarusian ruler left most of his political rivals imprisoned, while police have continued to prosecute Belarusians for such minor things as hanging the opposition’s white-and-red flag from their balconies.

The U.S. and the European Union have imposed harsh sanctions in response, hitting industries that provided cash for the regime. A few months ago, an enraged Lukashenko threatened to flood Europe with drugs and migrants. Europe and the U.S. believe he’s tried to make good on that threat by easing travel for refugees and migrants via Minsk to the EU’s border, which has resulted in an ongoing crisis at the Polish frontier.

In his interview with the Belarusian reporter, Neumann said he’d lived in Moscow in 1994 and complained that both Russia and Belarus were being “demonized” by Western media. He called U.S. sanctions against the countries “a form of terrorism.”

Neumann added that he would like to return to the United States, but only if he was guaranteed safety. Otherwise he said he would hope to remain in Belarus and get an IT job.

“Belarus showed me a lot of support, I want to do this country a favor and I respond with being a productive and good citizen,” he said.