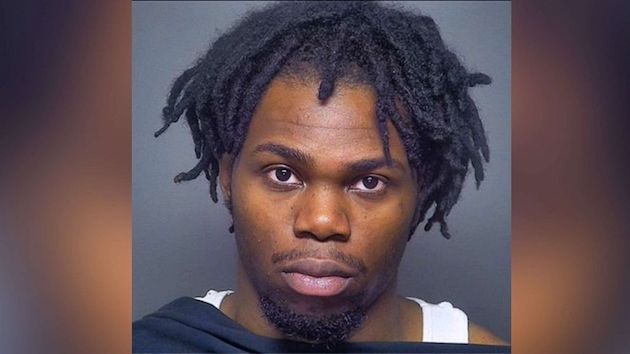 (CHESTER COUNTY, S.C.) — A man wanted in connection to several murders and shootings was taken into custody Monday morning after a massive search effort, police said.

“Tyler Terry is in custody,” the Chester County, South Carolina, Sheriff’s Office tweeted. “No shots were fired by any party. Everyone (including Terry) is safe.”

Terry, 27, had been on the run since last Monday night, when he was allegedly part of a high-speed police chase with Chester County Sheriff’s deputies, police said. Local residents had been urged to stay indoors for days as law enforcement searched for him.

In South Carolina, authorities connected Terry to the May 2 murder of 35-year-old Thomas Durell Hardin in York County and two other separate shootings, also on May 2, the Chester County Sheriff’s Office told ABC News.

The driver in last Monday’s chase, Adrienne Simpson of Myrtle Beach, crashed and was arrested, the Chester County Sheriff’s Office told ABC News. Simpson is accused of driving the vehicle that transported Terry in the May 2 murder and has been charged with accessory.

Authorities have also connected Terry and Simpson to two murders near St. Louis, Missouri, on the night of May 15, ABC affiliate WSOC in Charlotte, North Carolina, reported. They allegedly shot Stanley and Barbara Goodkin as well as Dr. Sergei Zacharev. Stanley Goodkin survived.

Simpson’s husband was found dead last week in Great Falls, South Carolina, and his death was ruled a homicide.

Chester County had over 300 law enforcement officers searching for Terry as of Monday morning.

“Mr. Terry was extremely fast, agile — and it adds to the dynamic that he had nothing to lose based on what he was facing,” Chester County Sheriff Max Dorsey told reporters Monday, explaining why it was so hard to catch him, WSOC reported.

Terry was seen running across Highway 9 on Sunday so deputies built up a perimeter that led to his capture Monday morning, Dorsey said.

He was later found lying down in high grass by a team from the Bureau of Alcohol, Tobacco, Firearms and Explosives (ATF). Terry did not put up a fight in his arrest, Dorsey said.

“I believe he was ready to run but he was surrounded and had nowhere to go,” Dorsey said, according to WSOC. “He was tired and thirsty. He was all cut up, bug bites, clothes torn. He’s exhausted.”