Activists call for police reform, teacher tells them to fix their communities 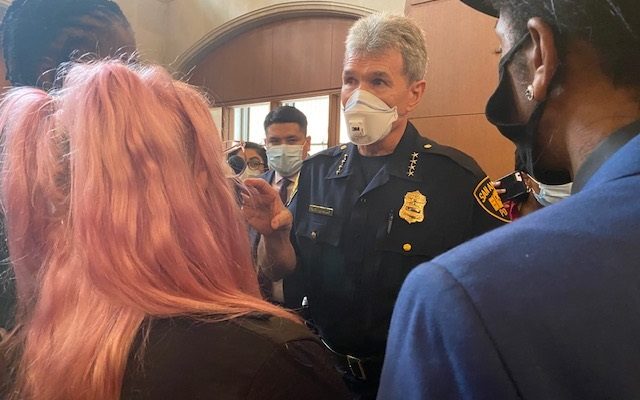 The city council’s Public Safety Committee heard a presentation from Police Chief William McManus on the diversity of the department  and  extensive training program for police cadets. It was the second of three listening sessions this week focused on policing.

Much of the discussion Thursday zeroed in on psychological testing administered to cadets before they become police officers.  Police Captain Brian Reyes told the committee that the personality evaluation includes a lie-detector test, and they are questioned about racial tendencies, although he couldn’t be specific about the exact questions.  Reyes suggested that one of the psychologists go before council members to provide more details on the exam.

Reyes also explained that SAPD requires 32 weeks of initial training at the academy, which is twice as much as required by the state.  Then they’re in a ride-along program for fourteen weeks, which he said is also twice as much as the state requires. People in the audience  yelled “It’s still not enough,” and “You’re still killing us.”

Nneka Cleaver told the committee chaired by Councilwoman Melissa Havrda that all the training in the world isn’t enough when you don’t have discipline on the force.  She echoed the concerns of several others who called for a repeal of Chapters 143 and 174 of the Texas Local Government Code, which allows officers to be reinstated after they’ve been fired for misconduct.

Most of the 20-plus residents who spoke called for police reform and slashing SAPD’s budget, but Tamara Smith told a different story.  Instead of facing the dais when she went to the microphone, she turned around, looked at the audience and told them to work to improve poor neighborhoods.

Smith told them she grew up in “the ghetto” which was overrun by “thugs,” but thanks to her mother, she got a college education and is a physical education teacher. She pleaded with the activists to help children in disadvantaged areas so that they don’t end up “with these guys.”  She was pointing at police officers.

A few people were nodding their heads in agreement, but the majority in the audience booed as she kept trying to speak after her allotted time expired.

District Attorney Joe Gonzales, who has been criticized by protesters for  not reopening the cases of three black men who were killed by San Antonio police officers, was in the audience, as well as city councilwoman Shirley Gonzales and Mayor Ron Nirenberg.

When the meeting concluded, several of the speakers surrounded McManus and questioned him about “no-knock” warrants, which he said he did away with several years ago.   The chief also explained to them why he won’t implement an outright ban on firing at a moving car.  He said officers are instructed not to fire at a moving vehicle unless the officer or someone else’s life is threatened.

The  last session on policing  will be a virtual meeting from 11:30 a.m. to 1:30 pm Saturday. You can provide comments through a form<https://sanantonio.jotform.com/COSA/PublicSafety> on the City’s website, by visiting www.SASpeakUp.com<http://www.SASpeakUp.com>, by texting SAPolice to 55000 or by submitting a voicemail to (210) 207-6991. If you’d like to speak during the meeting via live call back , include your name and telephone number in your voicemail.

Protests in San Antonio sparked by the death of George Floyd at the hands of a Minneapolis police officer have been going on since May 30.