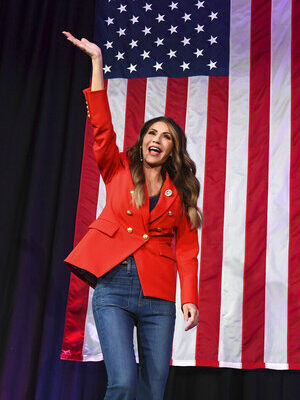 SIOUX FALLS, S.D. (AP) — South Dakota Gov. Kristi Noem took the stage late Tuesday after a hearty reelection win in her deep red state, speaking behind a sign that captured her ambition for staying in the national spotlight: “America’s governor.”

The Republican governor has sprung to national prominence during her first term as the state’s first female governor, and her 27 percentage point victory margin — larger than many expected — seemed to prove the popularity of her hands-off approach to the COVID-19 pandemic and rightward political push. Noem is widely seen as a potential 2024 White House contender, though she told her crowd of supporters who gathered at a Sioux Falls hotel Tuesday she was looking forward to four more years in South Dakota.

Her campaign spokesman, Ian Fury, summed up the victory margin on Twitter with a single word: “Mandate.”

Noem is looking to kick off her second term by enacting a historic tax cut, fend off attempts to soften the state’s abortion ban and address shortages in both child care and affordable housing. But she will be working with a Legislature, that despite being firmly held by Republicans, has sometimes produced significant political headaches for the governor.

Noem’s victory also came alongside heavy Republican wins up and down the South Dakota ballot. U.S. Sen. John Thune outperformed her by gaining 70% of the vote over his Democratic challenger, and other Republicans in statewide races had similar victory margins.

Voters also rejected a ballot measure to legalize recreational marijuana that was opposed by many of the state’s conservative officials. Meanwhile, they approved a constitutional amendment to expand eligibility for Medicaid.

Michael Card, a retired GOP political strategist and political science professor, said that any caveats to Noem’s win should not keep her from seizing the opportunity to press her agenda in the Legislature.

Noem said in her victory speech that she wanted to set an example to the nation of the effectiveness of Republican governors.

“We’re going to remember that the solution to our challenges lies in less government, not more,” she told the crowd. “We’re going to recognize that strong families are the key to strong communities.”

The governor’s top priority will be convincing lawmakers to repeal the state’s tax on groceries. She added, without going into detail, that she was looking to expand paid family leave and create a way for childcare workers to get benefits. Those proposals are key pieces of her goal of supporting families alongside a bid to uphold the state’s abortion ban, which was triggered by the U.S. Supreme Court’s June ruling.

Noem, an ardent abortion opponent, faces a challenge to the ban through a citizen-proposed constitutional amendment that could appear on the 2024 ballot. Abortion rights supporters won in the four states where access was on the ballot Tuesday, including in deep-red Kentucky.

Although Noem has rarely shied away from intra-party fights with state lawmakers, she will also have some key allies when the Legislature convenes in Pierre.

“As we enter next year there’s a lot of momentum, and I’m really looking forward to see our party work together as a team,” said Tony Venhuizen, who previously worked as her chief of staff, after winning a House seat Tuesday.

Republican Sen. Lee Schoenbeck, who has presided over his chamber for the previous two years, in September quickly voiced opposition to the governor’s grocery tax cut proposal, but said in a text message Wednesday that he was now “watching and listening” to the governor. The grocery tax repeal would cost the state about $100 million, but Noem argued Tuesday that the state could afford it with recent tax revenue projections coming in $80 million over what was projected.

A group of right-wing lawmakers, who have banded together this year as the Freedom Caucus, has also pushed for the tax cut, though the group’s vice-chair, Rep. Tony Randolph said it was unlikely to support government programs that address paid family leave or benefits for childcare providers.

Meanwhile, Democrats were not able to bring their ranks in the Capitol above a dozen lawmakers and will be without their former House and Senate leaders. However, one newly elected House member, Kameron Nelson, made history in the state as the first openly gay legislator.

Nelson said he was motivated to run in part because the Legislature perennially advances bills that single out transgender youth.

“I’m thrilled to be sitting on the House floor,” he said. “They will have to put a face to an entire group of people that they want to condemn.”

He added that he was also looking to find common ground with Republicans, especially on issues around education, expanding mental health resources and affordable housing.

“We as South Dakotans want to be able to provide for our families, make a living wage and ensure government is not interfering in our personal lives,” Nelson said.