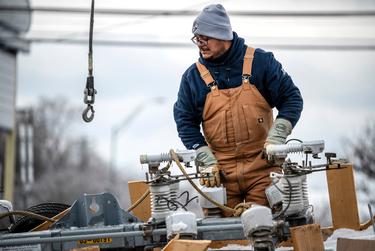 Electrical workers repair a power line in Austin on Feb. 18, 2021. Many Texas residents are still without power and many don't have clean drinking water or working water. Credit: Sergio Flores for The Texas Tribune

Harris County officials are launching an investigation into the events that led up to “Texas’ recent electricity disaster” and will be probing decisions made by the board that operates the state’s power grid, energy providers and the Public Utility Commission.

“Members of our community died in this disaster, and millions of Texans languished without power and water while suffering billions in property damage,” Harris County Attorney Christian Menefee said in a Tuesday statement. “Harris County residents deserve to know what happened, who made which decisions, and whether this could have been avoided or mitigated.”

Dozens of Texans died because of last week’s winter storm, which caused damages throughout the state that experts say could cost billions. Gov. Greg Abbott blasted the Electric Reliability Council of Texas for its handling of the emergency. He declared reform of the organization an emergency item for the 2021 legislative session.

Menefee will request authorization to take legal action on behalf of Harris County during its Comissioner’s Court meeting Friday. He said he is willing to collaborate with independent state agencies’ investigations as well.

He said operators should have been prepared after 2011’s hard freeze that exposed weaknesses in Texas’ electrical grid system.

“There was nothing unpredictable about this last freeze, and everyone had plenty of notice it was coming,” he said. “But, the people running the grid were woefully unprepared and failed to take immediate action and warn folks of what could happen.”

Spokespeople for ERCOT and the Public Utility Commission could not immediately be reached for comment.

State Rep. Trey Martinez Fischer, D-San Antonio, sent a letter to Travis County District Attorney’s Office urging it to launch its own investigation into the events and decisions made during last week’s storms.

“The State cannot investigate itself,” Martinez Fischer said in a statement. “We need a thorough outside investigation to determine whether acts and omissions of state officials violated the law.”

Martinez Fischer urged his House colleagues to call for similar investigations in their districts.