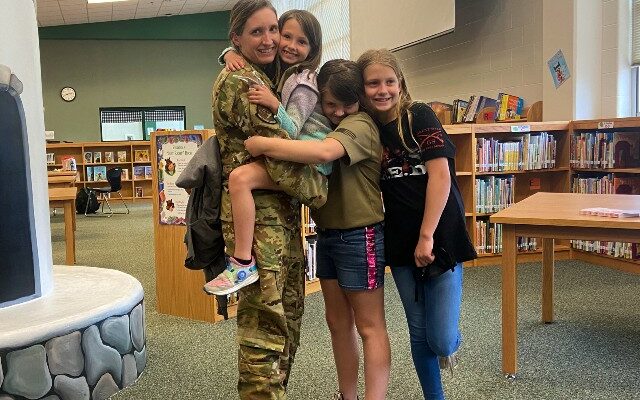 Walker left in November to Al Dhafra Air Base in the United Arab Emirates to fly as an evaluator pilot on an E-11A BACN, logging 426 hours across 48 combat missions. This was her fourth deployment to the Middle East, but her first being separated from her three daughters.

“It’s amazing,” Walker said. “You think about how it will feel [to see your children again], but you don’t know until you get to do it. You always talk about military kids being resilient. They were amazing and they amaze me every day.”

Walker’s children, Caroline, 12, Evie, 10, and Peyton, 7, thought their mom was returning to Texas on Tuesday. Caroline, who is a student at Hector Garcia Middle School in Boerne, learned that her mom was coming home this morning after her younger sisters left for school. Caroline said she picked her mom up at the airport with a welcome home sign, some Taco Cabana and a big hug.

McAndrew Elementary School Vice Principal Lindsey Christian said the surprise was in the works for a month. Christian and Principal De’Ann Upright didn’t clue school staff in on the surprise until today but still managed to coordinate them all to wear the color red in honor of all deployed military members.

“It means the world for us to get to see and help spread that happiness,” Christian said.

Walker said she remembers from her previous deployment in 2004 other soldiers driving 30 minutes away to video conference their families.

“I’m very thankful to have FaceTime and Zoom and all of these tools to try and stay connected,” Walker said. “The time difference was a little challenging, but again with the technology you set the clock and say, ‘Hey, it’s this time where Mom is.”

It’s been a long few days since Walker boarded her first plane to head home on Wednesday, so there isn’t much of a concrete plan for the weekend.

“It’s a holiday weekend so the timing worked out really well. It’s just reconnecting and being able to be with each other, we don’t really have real plans,’ Walker said with a laugh. “Just family time.”