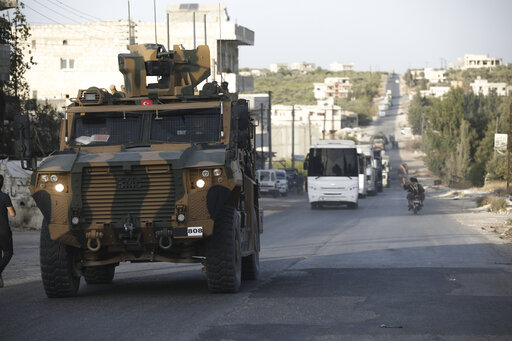 Turkish military convoy drives through the village of Urum al-Jawz, in Idlib province, Syria, Tuesday, Oct. 20, 2020. Turkish troops in northwestern Syria have been evacuating one of their largest military bases in the area, which was surrounded by Syrian government troops for months, activists said Tuesday. There was no immediate comment from Turkish officials. (AP Photo/Ghaith Alsayed)

BEIRUT (AP) — A Syrian opposition spokesman and a war monitor say an airstrike on a training camp in the last rebel enclave in northwestern Syria has killed over 50 fighters.

Youssef Hammoud, a spokesman for the Turkey-backed Syrian opposition groups, said the airstrike Monday is believed to have been carried out by Russia. Hammoud said it targeted a training camp in Idlib province run by Failaq al-Sham, one of the largest rebel groups in the Turkey-backed opposition.

The Britain-based Syrian Observatory for Human Rights, which monitors the war in Syria, said the strike killed 56 fighters and wounded nearly 50. Rescue missions are still underway, the Observatory said.