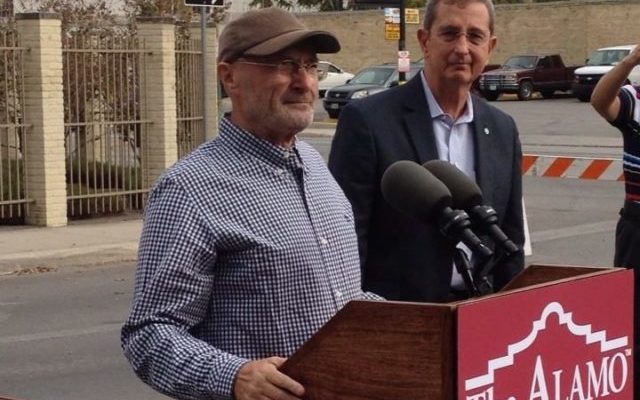 Collins was born in Middlesex, England and long before he joined the band Genesis in 1970…he became fascinated with the Alamo. As he toured the world with Genesis and later, as a solo artist, he was able to build up an impressive collection of Alamo artifacts. In June of 2014, Collins donated his collection to the State of Texas. KTSA News talked to Collins the day the artifacts returned to the Alamo.

“I have a …modest home in Switzerland and they were in the basement. I have a studio down there and a game room for the boys but I also had these items stored in display cases. There’s cannonballs, there’s swords…lots of swords. Muskets. One was found in San Jacinto and another one was actually owned by one of the defenders. It’s really only me and the housekeeper that saw it. Now it’s for everybody.”

Collins was made an honorary Texan the following year. The items he donated are currently in storage and will be on display once a new Alamo museum and visitors center is established.

His hit songs with Genesis include “Misunderstanding”, “No Reply At All” and “Invisible Touch.”

On his own, his recordings include “In The Air Tonight”, “One More Night” and “Another Day In Paradise”