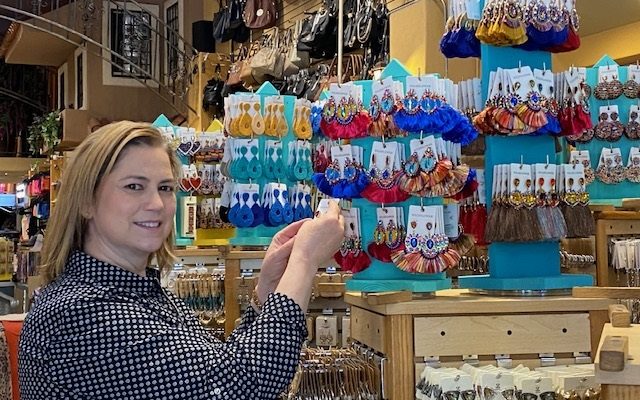 SAN ANTONIO (KTSA News) – Many retail owners are choosing to keep businesses  closed under the restrictions imposed by Governor Greg Abbott, which allows only 25-percent capacity.

With the Alamo closed and fencing around Alamo  Plaza, retail shops across from San Antonio’s major tourist attraction are lucky if they can get 1/4 of the number of customers they  drew before they were forced to shut down because of the coronavirus. That didn’t stop Kathy Sepulveda and her husband from reopening four stores as soon as they were allowed to.

“We didn’t hesitate to open,” Sepulveda said. “We just felt like we needed to bring our employees back.”

Sepulveda and her husband own Francesco’s Gelato Shop, the Plaza Marketplace, San Antonio General Store and Out West on Alamo Plaza.  They’ve been in business for thirty years, but she said it seems  as though they’re opening for the first time.  With hardly any tourists around, and many area businesses and attractions closed, they weren’t expecting many customers.

“We just need to have the attitude of coming out and giving it a try,” she told KTSA News as employees worked on the window displays.

Business also was slow at La Tienda on Alamo Plaza, which sells everything from jewelry and t-shirts, to cooking spices and souvenirs,  such as rattlesnake heads on keychains.

Manager Adam Barrientes  says in the first two hours after their reopening Friday, they had two customers and a couple of browsers in the store.

“We’re just going to take baby steps.  Our store hours are a lot shorter than usual,” said Barrientes.  “We’re getting used to wearing masks and constantly sanitizing everything.”

Sepulveda  remains optimistic about business picking up, but she knows it’ll take awhile.

“Until everybody gets over the fear of coming out, little by little, everything will start coming back,” she said. “We know it’s not going to be instantaneous.”

She hopes they won’t have to shut down again,

“If the coronavirus cases go up, there’s a chance we may have to shut down again, so we’re prepared for that, but we have to do what we can do right now,” said Sepulveda.  “We have to try.”