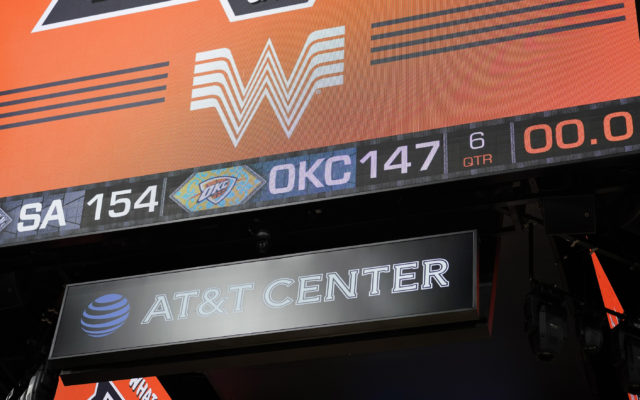 The final score of an NBA basketball game between the Oklahoma City Thunder and the San Antonio Spurs is displayed on the scoreboard Thursday, Jan. 10, 2019, in San Antonio. San Antonio won 154-147 in double-overtime. (AP Photo/Darren Abate)

By RAUL DOMINGUEZ, Associated Press
SAN ANTONIO (AP) — LaMarcus Aldridge scored a career-high 56 points and the San Antonio Spurs overcame Russell Westbrook’s triple-double with 24 points, 24 rebounds and 13 assists and outlasted the Oklahoma City Thunder for a 154-147 victory in double-overtime on Thursday night.
Aldridge had seven points in the second overtime and Derrick White added four points, a steal and a critical block of Jerami Grant at the rim with San Antonio up 148-144 with less than 2 minutes remaining. White finished with 23 points and Marco Belinelli made all five of his 3-point attempts while scoring 19 points for the Spurs, who have won seven straight at home.
San Antonio made its first 14 3-pointers to set a franchise record — but still needed two overtime periods to topple Oklahoma City.
Aldridge surpassed his previous career high of 45 points, which he set against Utah on March 23, 2018.
The Thunder lost their seventh straight in San Antonio despite Westbrook’s huge game. Paul George scored 30 points and Grant added 25 points and 12 rebounds, but fouled out with 25 seconds remaining in the second overtime.
The Spurs have won six of seven and 14 of 18 to close within a game of the Thunder for third place in the Western Conference.
Oklahoma City entered the game having held opponents to 33.3 percent shooting from 3-point range, the third-lowest in the league, but the Thunder couldn’t contain San Antonio early.
Belinelli made three consecutive 3-pointers in less than a minute in the opening quarter, and the Spurs made all 10 of their 3s in the first half to build a 16-point lead.
Oklahoma City rallied back and tied it at 114 with six minutes remaining in regulation when Steven Adams made consecutive follows off misses by Westbrook. Adams limped off the court with an ankle injury with 5 1/2 minutes remaining and didn’t return for the close of regulation but did play in both overtime periods.
Aldridge scored eight consecutive points with Adams out, but consecutive 3-pointers by Terrance Ferguson tied it again at 126. After the Spurs essentially abandoned the 3-pointer after their hot start, White drained a 3 to put San Antonio up 129-126.
With the Spurs up 130-128, Belinelli had the ball stolen at midcourt, leading to a tying layup by Grant with 5.6 seconds left. DeMar DeRozan missed a jumper at the close of regulation.
DeRozan missed another jumper with 0.3 seconds left in the first extra period and the Thunder could not put up a shot at the buzzer as White tipped the inbounds pass from Westbrook.
DeRozan finished with 16 points and 11 assists, but shot 7 for 22 from the field.
TIP-INS
Thunder: San Antonio’s 16 3-pointers tied the most Oklahoma City has allowed this season, which came Nov. 19 at Sacramento. … The Thunder, who shot 51 percent, are 9-2 when shooting 50 percent or better. … Raymond Felton was active but did not play for the sixth straight game. Felton has played only 30 minutes in 20 games since Dec. 3. … The Thunder’s last win in San Antonio was Dec. 25, 2014.
Spurs: San Antonio is 2-6 on the second night of a back-to-back. … Aldridge has 17,758 career points, passing Magic Johnson for 78th on the NBA’s all-time scoring list. Johnson had 17,707 points in 13 seasons with the Lakers. … The Spurs’ previous high for 3-pointers to start a game was 11 against Sacramento in 2002.
UP NEXT
Thunder: Host San Antonio on Saturday night.
Spurs: At Oklahoma City on Saturday night.
___
More AP NBA: https://apnews.com/NBA and https://twitter.com/AP_Sports