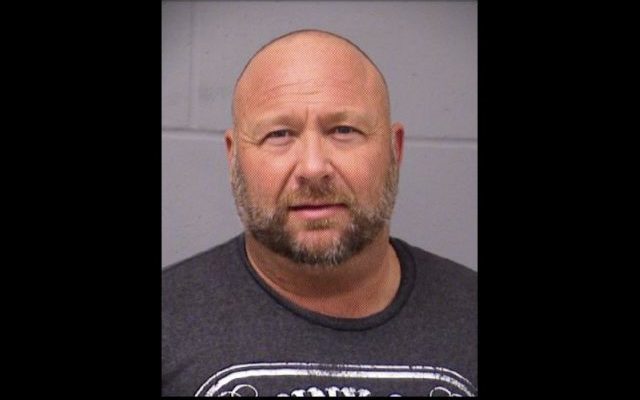 The Travis County Sheriff’s Office said it arrested 46-year-old Alex Jones on a misdemeanor charge of DWI.  He was booked into the county jail at around 12:40 a.m. and was released on bond at around 4:10 a.m. Tuesday.

Court documents say the sheriff’s office was called to Jones’ home at 10:10 p.m. Monday for a report of a family disturbance between Jones and his wife.

The disturbance was said to only be verbal, but “was physical” earlier in the day.

Jones left the house in a black 2020 Dodge Charger and was spotted a short time later on Barton Creek Boulevard near Wimberly Lane.

The documents say the deputy noticed a strong odor of alcohol coming from Jones.

While doing an assault investigation, Jones told the deputy he and his wife had been eating dinner at a sushi restaurant at around 8 p.m. — where he had consumed a bottle of Sake wine — when they got into an argument.

Jones ended up walking home from the restaurant — which was about three miles away.

The deputy said Jones explained he and his wife continued their argument when he got home.  The documents say he got into the car and left the house to go to another residence he owns in downtown Austin to get away from his wife.

The report described Jones as being excited and cooperative while displaying some typical signs of being impaired.  His field breathalyzer tests came back at .076 and .079.

Jones was only arrested on the DWI charge.