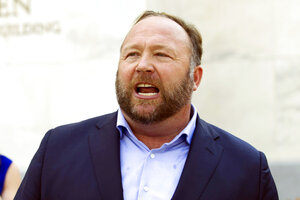 By JIM VERTUNO Associated Press
AUSTIN, Texas (AP) — Conspiracy theorist Alex Jones is set to face a defamation trial over his false comments that the 2012 Sandy Hook Elementary School massacre was a hoax.

Jury selection is scheduled to begin Monday in Austin, Texas.

Courts have already found the Infowars host liable for his portrayal of the Newtown, Connecticut, shooting that killed 20 first graders and six educators as a hoax involving actors.

At stake for Jones is another potentially major financial blow that could put his constellation of conspiracy peddling businesses into deeper jeopardy.