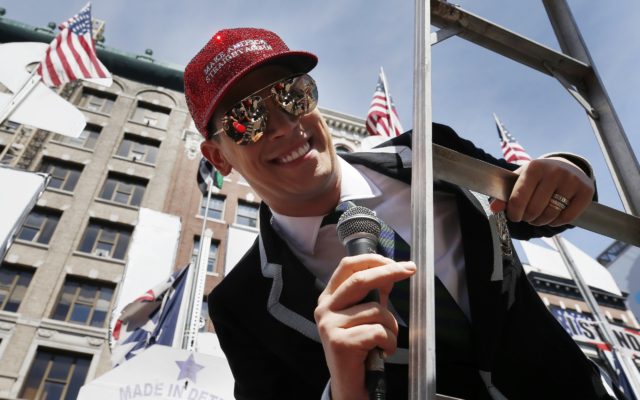 Milo Yiannopoulos address the crowd during the Straight Pride Parade in Boston, Saturday, Aug. 31, 2019. Several dozen marchers and about as many counter-demonstrators have gathered in Boston for a "straight pride" parade. The organizers say they believe straight people are an oppressed majority. (AP Photo/Michael Dwyer)

SAN ANTONIO (KTSA News) — Participants in a “Straight Pride Parade” that was held in Boston over the weekend are having their potency questioned by a Congresswoman from New York.

Alexandria Ocasio-Cortez sent out a tweet, complete with video of marchers.

She wrote, “For men who are allegedly so proud of being straight, they seem to show real incompetence at attracting women to their event.”

She also wrote that the event seemed more like a “I-Struggle-With-Masculinity” parade to her.

For men who are allegedly so “proud” of being straight, they seem to show real incompetence at attracting women to their event.

Seems more like a “I-Struggle-With-Masculinity” parade to me. 🤷🏽‍♀️

Hope they grow enough over the next year to support / join LGBTQ fam next #Pride! 🏳️‍🌈 https://t.co/DUb52ktWOP

The march drew hundreds of participants. It was organized by three men in response to LGBT Pride Month in June.

The group’s website claims the parade was to “achieve inclusivity” and “spread awareness of issues impacting straights in Greater Boston and beyond.” It wasn’t just a group of straight, white men parading through Beantown.  Organizers invited everyone, unless they were not “happy and fun”.

Along with the thousands of counter-protesters lining the parade route, there was a strong police presence. More than 30 people were arrested.