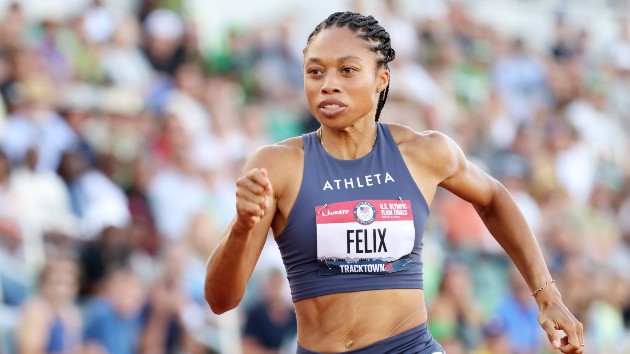 (NEW YORK) — Nine-time Olympic medalist Allyson Felix is heading to her fifth Olympics, the Toyko games, which will be her first since becoming a mom. Now, she has a new accomplishment to add to her long list — her own lifestyle brand.

The 35-year-old track star says her new lifestyle brand, Saysh, was inspired by Felix’s experience with “gender injustice” during her journey to motherhood.

After giving birth to her daughter, Camryn, in 2018, Felix penned an opinion article in The New York Times, talking about the lack of maternity protections with her then-sponsor Nike. While negotiating her Nike contract, the brand wanted to pay her 70% less than before she was pregnant, Felix said.

Felix and Nike never agreed to new terms. Following her opinion piece, the company announced a new maternity policy for all sponsored athletes. The policy states that Nike cannot perform any performance-related reductions for a consecutive period of 18 months, beginning eight months prior to the athlete’s due date. Additionally, during this period Nike may not apply any right of termination as a result of the athlete not competing due to pregnancy.

Felix says being forced to choose between motherhood and being a professional athlete inspired her to create Saysh — a brand she hopes will represent the power to create change.

“All of my experiences of becoming a mom and of raising a daughter helped show me my true competitor: inequality,” Felix said. “The launch of Saysh is another step towards greater equity for each of us, and when you see me run, know that I’m running towards family, towards motherhood.”

The brand’s debut campaign includes the launch of Saysh One — a lifestyle sneaker for women.

“In the world of sports, women are mostly an afterthought. And especially in footwear, shoes are built for what is considered the largest market: men,” Saysh One’s product designer Natalie Candrian said. “The Saysh One is engineered for her, understanding the true proportion and need of a woman’s foot.”

The brand will also have a membership option, The Saysh Collective, that will aim to facilitate conversation, allow members to partake in workouts and give exclusive access to future products. For $10 a month members will have unlimited access to the community platform and receive a pair of Saysh Ones with sign up.