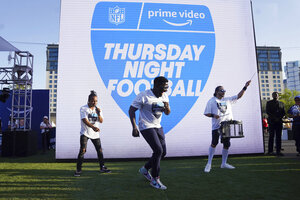 Not many people get to be a pioneer at 77 years old, especially in sports broadcasting.

That will be the case, though, when Al Michaels calls Thursday night’s game between the Los Angeles Chargers and Kansas City Chiefs on Prime Video.

The matchup between AFC West rivals kicks off an 11-year agreement between Amazon and the NFL and marks the first time the league has sold a package of games to a streaming service.

“It wasn’t that long ago I had no idea what streaming was, as did a lot of us. I find it exciting because all of my friends, my kids, and grandkids all think this is about the coolest thing in the world,” said Michaels, who will team up with Kirk Herbstreit and sideline reporter Kaylee Hartung.

Amazon won the rights to the prime-time package last March. It was initially supposed to begin in 2023, along with the rest of the league’s broadcasting contracts, but two months later, the NFL announced that they would take over the Thursday night package from Fox a year earlier.

That left Amazon with 15 months to get everything up and running. It marks the first time since Fox in 1994 that a new broadcasting partner has been brought into the NFL framework.

For Marie Donoghue, Amazon’s vice president of Global Sports Video, Thursday’s game marks a rewarding end of a four-year quest to bring the NFL to the company.

Donoghue was an executive VP at ESPN for 19 years and saw what the NFL could do for Prime Video much as it did when ESPN and Fox began carrying games.

“I believe it’s a once-in-a-generation opportunity to create something for fans,” she said. “The trends are all in our favor.”

While this is Prime Video’s first significant US sports package — it carries some New York Yankees, Seattle Storm, and Seattle Sounders games regionally — they have a robust international resume.

In the United Kingdom, they carry 20 Premier League games and the US Open tennis tournament. It will also carry a package of Champions League games in the UK beginning in 2024. They already stream the European club soccer competition in Italy and Germany.

The biggest concern about any event that is streamed live is video quality, along with making sure the infrastructure can handle the demands. Jared Stacy, Prime Video’s VP of Global Sports Production, was already in the production truck at Arrowhead Stadium Tuesday afternoon going over final preparations, including covering all contingencies.

“I think we’ve got the best and the brightest working on that infrastructure,” he said. “We’ve delivered massive events throughout Europe. This is day one for ‘Thursday Night Football’ exclusively on Prime Video, but we’ve been doing Champions League and Premier League. We’ve learned a lot and already do that at a really high level with a really stable stream. So we feel pretty confident about where we’re at on that front as well.”

Amazon and the NFL also have a prior working history. Amazon Web Services has partnered with the league for Next Gen Stats since 2015, while Prime Video has simulcast Thursday night games since 2017.

The 15-game package averages $1.2 billion per season. That could go up slightly beginning next year when the NFL is expected to schedule a game for the day after Thanksgiving since “Black Friday” unofficially kicks off the Christmas shopping season.

“There has been a lot of synergy over the years. I think being part of the Thursday Night Tricasts (same game on Fox, NFL Network and Amazon) also gave us and the NFL a comfort level combined with the experiences of what we’ve been able to prove over in Europe,” said Prime Video vice president Jay Marine.

Jon Christian, the EVP for OnPrem, a technology consulting firm specializing in media and entertainment, said the Thursday night package is a great test case for the NFL.

“Through streaming, the NFL will have direct-to-consumer access and be able to measure the audience and compare with previous traditional delivery methods,” he said. “This is the first time an NFL game will be locked behind a streaming subscription service. This will eliminate a portion of the audience that doesn’t have this capability or Amazon Prime. It will be interesting to see how much they gain from the ‘cord-cutters’ and how much this deal spurs new Amazon Prime subscribers.”

Those watching on the Prime Video app on their TVs, phones, or tablets can access on-demand statistics and highlights to enhance the second-screen experience.

When it comes to the actual game broadcasts, don’t expect them to reinvent the wheel with executive producer Fred Gaudelli calling the shots. It will be Gaudelli’s 33rd season as the lead producer for an NFL prime-time package. He worked on ESPN’s Sunday night package from 1990-2000 and ABC’s “Monday Night Football” from 2001-05 before going to NBC’s “Sunday Night Football” for the past 16 seasons.

Gaudelli and his production crew have state-of-the-art equipment, including an ergonomic production truck that allows him to call the game standing up. The production crew did two run-through sessions in Los Angeles before the preseason game between the San Francisco 49ers and Houston Texans on Aug. 25.

Many lauded the preseason presentation, saying it appeared that Prime Video had been carrying games for a couple of years instead of it being their first.

“I think the quality of the game coverage, and obviously the announcing, will be as good as there is in the NFL. That’s my goal, that’s why I’m here, and that’s what we intend to do,” Gaudelli said. “The big differences are going to be on all the other things you can access while you’re streaming a game that you can’t access while watching it on television. I think you’re going to get a more enriched experience.”

Gaudelli has worked with Michaels since 2001 while Herbstreit emerged as the analyst after Troy Aikman decided to go to ESPN. Hartung, previously an ESPN sideline reporter, returns to sports after five years with ABC News and CNN.

The area where Prime could stand out is its pregame show. They have established veterans in Charissa Thompson and Tony Gonzalez, but have also hired Richard Sherman, Ryan Fitzpatrick, and Andrew Whitworth. Having three television rookies coming straight off the football field could make things entertaining.

“It’s nice to have rookies, for lack of a better word. They don’t have these like pre-fixed ideas of what TV should be,” Thompson said. “They are all so natural. I can throw them a question, and they are ready and know how to change direction.”

While the NFL and Prime Video would like to draw big viewer numbers immediately, both parties realize the transition will take some time, even though there has been extensive promotion about where to find the games. While everyone focuses on the first game, the bigger picture is down the road.

“This is the start of an 11-year deal. Of course, we want the biggest audience possible, but this is a big change for fans,” Donoghue said. “We’re very comfortable with that. We are overly focused on our production and what we deliver for fans. We’ve got an incredibly high bar that we set for ourselves. So we know this will evolve over time.”