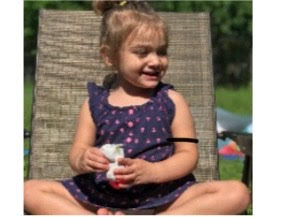 SAN ANTONIO (KTSA News) — The Amber Alert for a missing two year old has been called off and the girl is reported to be safe.

They were located at around 8:30 Friday morning on IH-35 in McClennon County.

Police says the child is fine and will be reunited with other family members.

SAN ANTONIO (KTSA News) — An Amber alert has been issued for a missing two year old.

Police are  looking Aurora Lee Lopez and the woman who may have abducted her.

Aurora is 3 feet tall and weighs 20 pounds with brown hair and eyes and it’s believe she is in grave or immediate danger.

She weighs 180 pounds and has brown hair and eyes. McGill was in San Antonio the last time anybody heard from her.

She drives a black 2012 Honda Accord with the Texas plate number KTR2989.

Anybody with information regarding the whereabouts of Aurora Lopez or Sherry McGill can call the Bexar County Sheriff’s Office at 210-335-6000.