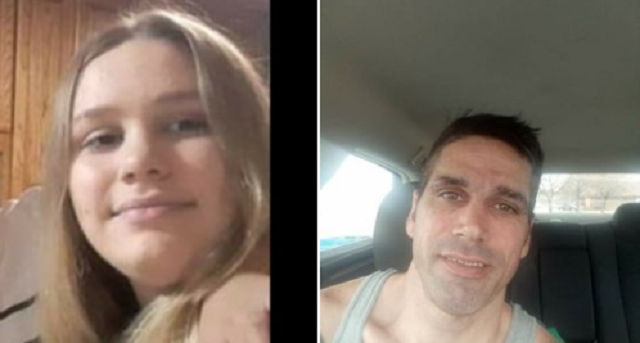 SAN ANTONIO (KTSA News) – An Amber Alert has been issued for a 14-year-old girl reportedly abducted by her non-custodial father who is a registered sex offender.   Rains County Sheriff’s investigators believe Lexus Nichole Gray is in “extreme danger.”

She was last seen in Point, Texas last March 24.   Lexus is 5’6″ and weighs about 160 pounds with blond hair and hazel eyes.  She has a nose ring and was carrying a backpack when she was allegedly abducted by 40-year-old Justin Shaun Gray.

Justin is  6’1″ and weighs about 200 pounds with black hair and hazel eyes. He has several tattoos over his abdomen, chest arms, hands and wrists.  Justin has a scar on his chin and left arm.  He’s a registered sex offender with an active parole violation warrant linked to a sexual assault of a minor in 2009.

Justin is accused of taking Lexus from her home in Point last Wednesday after chasing the girl’s mother with a knife.  Investigators say Justin and Lexus have been  seen in Mesquite, Dallas and Plano since the abduction was reported.

Anyone with information on their whereabouts is asked to call 9-1-1 or contact the Rains County Sheriff’s Office at 903-473-3181.