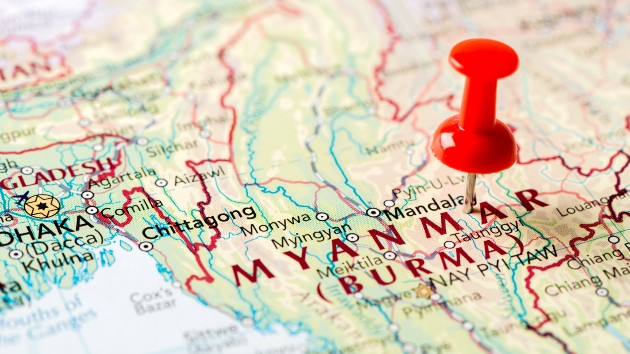 (LONDON) — An American journalist working in Myanmar has been detained there by local authorities, according to his employer and his family.

Frontier Myanmar, a Yangon-based news and business magazine that publishes in print and online in both English and Burmese, said in a statement Monday that its managing editor, Danny Fenster, was detained at Yangon International Airport in Myanmar’s largest city as he was preparing to board a flight to Kuala Lumpur, Malaysia. He has since been transferred to Insein Prison in Yangon, which has housed thousands of political prisoners.

“We do not know why Danny was detained and have not been able to contact him since this morning,” Frontier Myanmar said. “We are concerned for his wellbeing and call for his immediate release. Our priorities right now are to make sure he is safe and to provide him with whatever assistance he needs.”

Fenster, a 37-year-old Detroit native, was planning to visit his family in the United States, according to relatives.

“We’re absolutely stunned and extremely confused as to why Dan was detained,” his brother, Bryan Fenster, wrote in a post on Facebook.

“We love him and are concerned for his safety,” his cousin, Amy Kurzweil, wrote in another Facebook post.

ABC News has reached out to Fenster’s family for additional comment.

The U.S. Department of State is “aware of reports” of an American detained in Myanmar, according to a spokesperson.

“We take seriously our responsibility to assist U.S. citizens abroad, and are monitoring the situation,” the spokesperson told ABC News in a statement Monday. “Due to privacy considerations, we have no further comment.”

A number of journalists — local and foreign — have been arrested in Myanmar since the military seized power in an apparent coup on Feb. 1, ousting the civilian-led government and reversing a decade of the country’s slow road to democratization. A military junta had previously ruled the Southeast Asian nation, formerly known as Burma, for nearly 50 years.

According to the Assistance Association for Political Prisoners, a human rights organization based in Yangon that keeps a detailed tally of arrests and deaths since the junta’s takeover, more than 4,300 people are in detention, including 96 who have already been sentenced. Another 824 people, including children and many protesters, have been killed.

Fenster is believed to be the fourth foreign journalist to be detained in Myanmar since February. Another American journalist working in Myanmar, Nathan Maung, editor-in-chief of local news outlet Kamayut Media, is being held at Insein Prison.

The Committee to Protect Journalists, a New York-based press freedom group, has called for Fenster’s release.

“Myanmar authorities must immediately and unconditionally release Frontier Myanmar managing editor Danny Fenster and allow him to travel freely outside the country,” Shawn Crispin, senior Southeast Asia representative for the Committee to Protect Journalists, said in a statement Monday. “This unlawful restriction of a foreign journalist’s freedom of movement is the latest grave threat to press freedom in Myanmar.”