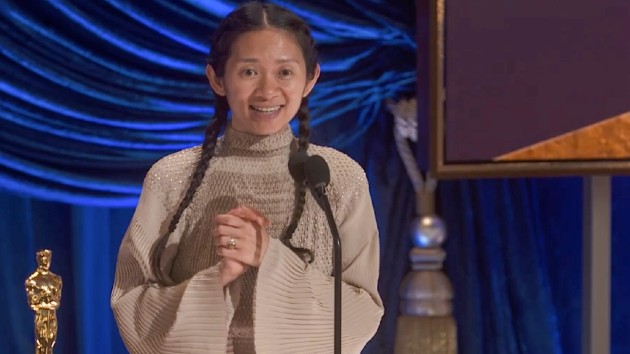 Her win comes as anti-Asian hate crimes are spiking in cities across the country. Backstage, she told ABC Audio that she hopes that her win not only inspires filmmakers of Asian descent, but that movies can help bring all people together.

“We have to tell the stories that we feel connected to. We shouldn’t feel like there’s [only] certain types of story we have to tell,” Zhao said.

“But [film is] a way for us to connect with other people. That’s why I love filmmaking, you know, and hopefully a lot of the stories, brilliant stories we saw tonight, like Tyler Perry said, that was a beautiful speech, you know, ‘let’s get together and let’s stop hate.’ Hate for anybody.”

Chloé Zhao’s next big-screen project is Marvel Studios’ The Eternals, the 2020 release of which had been delayed by the pandemic. It is now scheduled to come to theaters November 5.

Marvel Studios is owned by Disney, the parent company of ABC News.