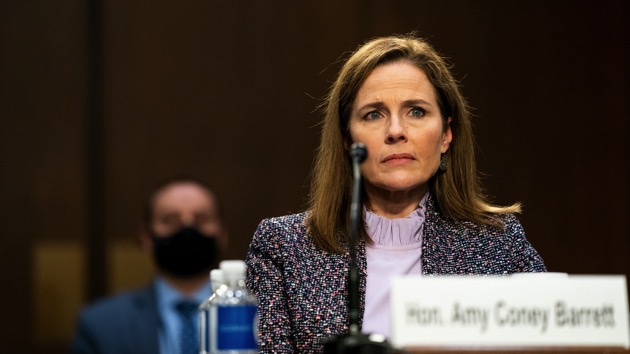 (WASHINGTON) — Democrats on Thursday mounted a brief protest to try to delay committee action on the nomination of Amy Coney Barrett to replace the late Justice Ruth Bader Ginsburg on the Supreme Court, but Senate Judiciary Committee Chairman Lindsey Graham barreled forward with the support of his GOP colleagues on the panel — casting aside committee rules in the process.

Graham hit back: “If we create this problem for you in the future, you’re going to do what I’m going to do which is move forward on the business of the committee.: A brief vote was conducted with all Republicans supporting the chairman, and the protest was ended.

With Democrats’ delay effort shut down and a vote on the nomination scheduled for Oct. 22 at 1 p.m., it was even more apparent that Barrett is on track to be approved by the Senate by Election Day, a key goal of President Donald Trump who has said she could help decide any election-related dispute that comes by the Supreme Court.

Barrett said she would seriously consider whether she should recuse herself but did not commit to recusal as Democrats pressed her to do.

Despite the remarkably low-key question-and-answer period on Tuesday and Wednesday, Democrats were highly critical of Barrett as the proceedings neared a close, casting her rise to the nation’s highest court in the most ominous terms, accusing her of wanting to be an activist judge who will surely cast a deciding vote to strike down scores of laws that would affect millions of Americans, from guaranteed health care for those with preexisting coverage to same sex marriage and even climate change.

“They want her to be the ninth justice to make a decision on the election, rather than the voters,” Sen. Richard Blumenthal, D-Conn., told reporters, “And they want someone to strike down the Affordable Care Act and Roe v. Wade.”

Barrett, for her part, studiously avoided any hint of how she might one day rule, if confirmed, refusing to answer even the simplest of questions – including whether a president has the power to delay an election. According to federal law, that power rests solely with Congress.

Instead, Barrett kept fast to a stock answer she used in similar ways throughout 19 hours of questioning, “If that question ever came before me, I would need to hear arguments from the litigants and read briefs and consult with my law clerks and talk to my colleagues and go through the opinion writing process. So, if I give off the cuff answers, then I would be basically a legal pundit. I don’t think we want judges to be legal pundits.”

The focus of much of the two days of questioning was on the Affordable Care Act with a case coming before the high court just one week after the election, and Democrats making the case that a Justice Barrett would likely cast the deciding vote that could see the destruction of the Obama-era law and ultimately leave some 20 million Americans with preexisting conditions without health care.

Democrats repeatedly ridiculed the expedited hearings occurring just 14 days from Barrett’s nomination, citing new talks found on a Notre Dame calendar given by Barrett in her time as a professor — as first reported by CNN — that were not included in the committee questionnaire as required. Still, Republicans pushed on.

Never in history has a nominee to the Supreme Court been confirmed so close to an election.

“This is a hypocritical sham rush job,” Sen. Mazie Hirono, D-Hawaii, argued. “The court is definitely going to the right, and with her presence on the court … all of these precedents are subject to being overturned. That’s what’s at stake.”

Democrat Durbin said he feared for the future of the panel with rules and norms broken so casually.

“I don’t know how we get this train back on the track. This nomination is not normal … We should’ve waited,” Durbin warned.