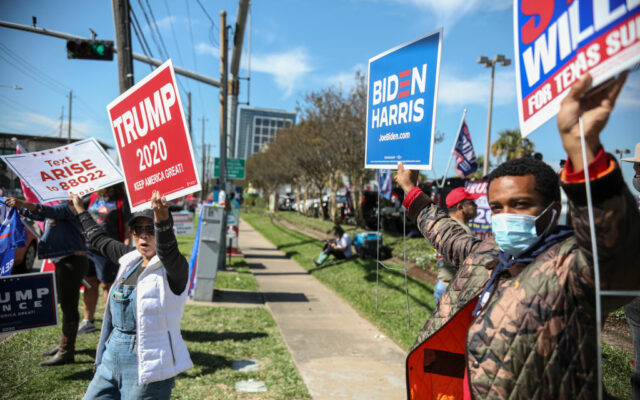 HOUSTON, TX - NOVEMBER 03: President Donald Trump and Vice President Joe Biden supporters during a rally on West Gray Street on November 3, 2020 in Houston, Texas. After a record-breaking early voting turnout, Americans head to the polls on the last day to cast their vote for incumbent U.S. President Donald Trump or Democratic nominee Joe Biden in the 2020 presidential election. (Photo by Sandy Huffaker/Getty Images)

“So much for all that talk about Texas turning blue.”

That was the entire statement from Trump Victory spokesperson Samantha Cotten just after midnight Wednesday night.

It’s hard to argue with that assessment, but there are many interesting layers to peel back about the 2020 election in Texas and many lessons to be learned — again — about who voters are, who voters are voting for, and assumptions.

In political science and political polling, there are two working assumptions: there are more registered Democrats than Republicans and larger turnout is good news for Democrats.

We’ll address the registration numbers a bit later, since that ties into the projection models used to forecast elections.

The biggest headline out of Texas: Democrats lost a lot of ground among Hispanic voters.

Let’s talk about what happened Tuesday, starting with the presidential race.

The headline many people will talk about regarding the presidential results in Texas will be the margin of victory: a nine point advantage for Trump in 2016, while it was only six points for Trump in 2020.

Is it noteworthy?  Sure, but there are caveats.

So, where did that extra three percentage points come from if it didn’t come from Trump?

In 2016, Libertarian Party candidate Gary Johnson got 3.2 percent of the Texas vote.  This year?  Jo Jorgensen only got about 1 percent of the vote.  That is your difference.

In theory, what this means — aside from the turnout and sheer volume of voters — is the percentages of people who did vote for Trump in Texas and did not vote for Trump are the same.  In 2016, voters may have simply not been interested in Trump, not interested in Clinton, and voted for Johnson instead.  The 2012 presidential results would back that up: Johnson only got 1.1 percent of the vote in that election.

Biden flipped two suburban counties: Williamson and Hays — both outside of Austin.  Williamson was a close race, Hays County was a bigger win for Democrats.  Biden also had gains in the urban counties.  Harris County was a slight gain for Biden from 54 percent of the vote to 56 percent.  A slightly bigger gain in Bexar County, from 55 percent to 58 percent.  In Dallas County, a climb from 61 percent to 65 percent.  And the granddaddy of them all: Travis County, up from 66 percent to 71 percent.

But at what cost to the Democrats?

A hat-tip to KTSA’s Jack Riccardi for pointing this out first.

And Starr County?  Only 52 percent of the vote went for Biden — a 27 percentage point drop in one election cycle and 36 percentage points since the last time his name was on the general election ballot.

On top of that, Biden only won one North Texas county: Dallas, though it was a close one in Tarrant.

Hopes were raised when Beto O’Rourke looked like he had a chance in 2018 to unseat Ted Cruz in the U.S. Senate.  He came close with his 2.6 percentage point and 215,000 vote deficit to the incumbent Republican.

It made people who yearn to break the Republican control of Texas say they were close to breaking through and that it will come in 2020.

Unfortunately, they missed the other signal from the 2018 election: the governor’s race.

If you compare the county vote maps of Greg Abbott’s 2018 gubernatorial win and John Cornyn’s 2020 senate win, they are exactly the same colors with only one minor exception of Cornyn losing Fort Bend County.

Does this mean a “blue” wave is not coming?  No.  What it does mean is that every election is unique and the role individual candidates play in each race may be a bigger factor than just the letter after their name.

In political science and political polling, there are two working assumptions: there are more registered Democrats than Republicans and larger turnout is good news for Democrats.

Both assumptions are generally based on solid data, the former more firmly than the latter.  The Democratic Party historically had more people be registered members than the Republican Party.  The fact that many Democrats don’t vote is a bit squishier.

These assumptions are worked into polling data in an effort to generate a more accurate picture of the political landscape.  You can find this weighting in any good poll; the pollsters will list the number of people from each party or stated they were independent (there are more people in this faction than registered to either party) along with the margin of error at the end of the survey results.

The most recent poll done by Gallup asking this question — done just last month — found the percentage of who consider themselves to be either a Republican or a Democrat is now even at 31 percent each.  Take note, this survey asked what people considered themselves, not which party they are actually registered to.

Let’s take this and compare it to the samples from three recent polls.

The first example is a Quinnipiac University poll released Monday.  It was actually three polls — one on Florida, another on Ohio, and a third one on the national figures.  Its sample was 34 percent Democrat, 28 percent Republican, and 28 percent independent and was rendered by the question: “Generally speaking, do you consider yourself a Republican, a Democrat, an Independent, or what?”

Quinnipiac said its survey was weighted to match demographics according to census data.  This survey gave Biden an 11 point advantage.

The second example is an Emerson College poll released Sunday on the Texas on the presidential race and the U.S. Senate race, among other “Southern” political races.  It did not specify how its survey sample was divided by party affiliation, other than that it was weighted to factor that in as well as demographics.

The poll had the presidential race in Texas a tie and gave John Cornyn a five-point lead over MJ Hegar.

The third example is an exhaustive poll done by YouGov for The Economist that was released Monday.  It also did not specifically lay out the party affiliations of its survey takers, only saying that it used data on how that person voted in the 2016 election as a weighting factor.

That poll gave Biden a ten point lead over Trump.

This is not to say there is anything nefarious going on with polling.  In fact, it may just be a reminder to all of us of what the Tampa Bay Rays learned in the World Series this year: data is a tool, not an ultimate decision maker.

From a pollster perspective, relying too much on data to weigh or determine how to crunch the opinions of voters into numbers could open a poll up to using data that itself may be faulty — like voter party affiliation — and taint the entire pool.

Yes, data is great.  I love data.  But there is an essence lost when you are just looking at numbers.

The best comparison I can give is from by own personal reporting during the 2016 presidential election.  I was working in Washington, DC, for a radio station there at the time and my usual off day was Tuesday — which happened to work out for me, unexpectedly in my opinion, for election day.  I used it as an opportunity to do some reporting for one of our networks and set out across Virginia talking to voters at polling places.

In the months leading up, I had done some traveling in the Mid-Atlantic region for personal reasons and was able to listen to people open up about political issues I had no idea mattered to them and how it impacted them from all perspectives and angles.

The data leading into election day was that it was going to be a Clinton blowout.  The numbers couldn’t lie, could they?

I set out on my journey, making stops in Arlington (a heavily Democratic city/county outside Washington), Spotsylvania (solid Republican exurban northern Virginia county), Chesterfield (the most populated “Republican” county in the state), and South Hill (a town in southern Virginia).

There was a theme no matter where I went, who I talked to, and who they voted for: voters supporting Clinton had a very uneasy feeling about the election while Trump voters were clear in their reasoning and decision-making about their choice.  They were all random people I found along the way, just living their lives and kind enough to talk to a man with a microphone in his hand.  None of them out to make or prove a point.  We just talked — on the record, of course.

It is the nuance that is lost when talking about polls and projecting what will happen with big fancy graphs and 3D holographic models in the middle of TV studio.  How do people actually feel?  When voters give their binary ‘Answer 1’ or ‘Answer 2’ responses, were they excited?  Were the uninterested?  Did they want the scary guy or gal with the tablet in the hand to just leave them alone?

Yes, numbers are interesting and fun to play around with.  They are good for research, but they don’t tell the whole story.

When I woke up in my hotel room in Charlotte, North Carolina, in the middle of the night after passing out from the long drive and hearing on the TV I had left on that Donald Trump had won the election, it wasn’t a surprise.

Sure, my experience was anecdotal.  But when you make political reporting more about understanding the breadth of people in our world and not about particular interests, storylines, or getting raw data, you learn more about the people the story is really about: normal, everyday Americans — the people who end up going to the polls on the first Tuesday in November every four years.

And what happens on those first Tuesdays in November never become a surprise.