By ARNIE STAPLETON, AP Pro Football Writer
ENGLEWOOD, Colo. (AP) — The Baltimore Ravens have agreed to trade quarterback Joe Flacco to the Denver Broncos in exchange for a fourth-round pick in this year’s NFL draft, a person with knowledge of the agreement told The Associated Press.
The person spoke to the AP on condition of anonymity Wednesday because neither team announced the deal, which was first reported by ESPN. NFL rules prohibit teams from discussing trades until the start of the league year on March 13.
Flacco, the MVP of the 2013 Super Bowl following a miraculous win at top-seeded Denver, became expendable in Baltimore with the emergence of rookie Lamar Jackson, the former Louisville star who led the Ravens into the playoffs after Flacco got hurt.
The Broncos again need an upgrade at QB after Case Keenum’s middling debut in Denver, where a 6-10 finish led general manager John Elway to turn to Vic Fangio , his fourth head coach in six seasons.
Now, he’s landed his seventh quarterback since Peyton Manning’s tearful retirement following Denver’s win in Super Bowl 50.
The others all bombed: draft picks Brock Osweiler, Trevor Siemian, Paxton Lynch and Chad Kelly, trade acquisition Mark Sanchez and Keenum, who threw for 18 TDs and a career-high 15 interceptions last season to go with a career-high 34 sacks.
Flacco’s contract, which has three years and $63 million remaining, could be reworked in Denver. So could Keenum’s deal, which guarantees him $7 million this season, if the Broncos keep him as a backup, although they could save $11 million by jettisoning him.
Either way, Elway’s deal for Flacco continues his build-but-don’t-rebuild ethos. The Broncos have a solid core of young stars and a still superior defense led by Von Miller and Chris Harris Jr. that Elway believes can keep up with the Chargers and Chiefs in the AFC West with the right quarterback leading the way.
Facilitating his deal for Flacco was the extra fourth-round pick he had at his disposal from the Demaryius Thomas trade to Houston last fall.
In Flacco, the Broncos are turning to a quarterback who broke their hearts six years ago in what’s arguably the lowest point in franchise playoff history.
Denver was the top seed after going 13-3 in Manning’s first season in Denver and the Broncos took an 11-game winning streak into their divisional round playoff game against Baltimore.
In the waning seconds of regulation, Flacco connected with Jacoby Jones on a 70-yard touchdown pass to force overtime in a game the Ravens won 38-35 in double overtime. Safety Rahim Moore went for the interception instead of the tackle and mistimed his leap, allowing Jones to catch the ball at the 20-yard line and trot into the end zone with the tying touchdown.
Flacco, who turned 34 last month, has played all 11 of his seasons with the Ravens after being selected 18th overall in the 2008 NFL draft. He started immediately as a rookie and was Super Bowl MVP after the 2012 season, guiding the Ravens to a victory over San Francisco in the championship game during a playoff run that included that “Mile High Miracle” in Denver.
Flacco was the starter last season until he injured his right hip in a loss to Pittsburgh on Nov. 4. The Ravens had a bye the following week, and Jackson took over for the still-ailing Flacco on Nov. 18 against Cincinnati. Jackson produced wins over the Bengals, Raiders and Falcons before a 27-24 loss to Kansas City on Dec. 9.
Flacco was healthy enough to return the following week, but coach John Harbaugh said Jackson would be his starter in a matchup against Tampa Bay. Jackson retained the job, going 6-1 to get the Ravens into the postseason before coming up short in a first-round loss to the Los Angeles Chargers.
The Ravens went 106-72 with Flacco as a starter, including the postseason. He is the team career leader in attempts (5,670), completions (3,499), yards (38,245) and touchdowns (212). His 10 playoff victories since 2008 rank second behind Tom Brady among active quarterbacks.
Flacco and Harbaugh arrived in Baltimore together in 2008. They proceeded to reach the playoffs in each of the next five years. Flacco was the first starting quarterback since the 1970 merger to win a playoff game in each of his first five years. Russell Wilson duplicated the feat from 2012-16.
During Baltimore’s 2012 run to the Super Bowl, he threw 11 touchdown passes without an interception, his most notable being the 70-yarder to Jones in the double OT win.
The Broncos eventually recovered from that devastating defeat to win a Super Bowl in Manning’s final game. But they’ve gone just 20-28 since then while churning through quarterbacks, coaches and offensive coordinators.
The Broncos lost their final four games last season to finish 6-10, marking their first back-to-back losing seasons since the Nixon administration.
Afterward, Elway said Keenum was “probably a short-term fix,” something Keenum insisted last week didn’t bother him as he prepared for the upcoming season.
___
More AP NFL: https://apnews.com/tag/NFL and https://twitter.com/AP_NFL
___
AP Sports Writer Dave Ginsburg contributed.
___
Follow Arnie Melendrez Stapleton on Twitter: http://twitter.com/arniestapleton 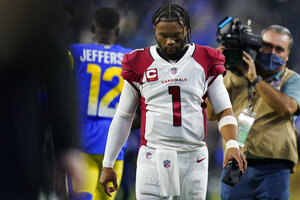