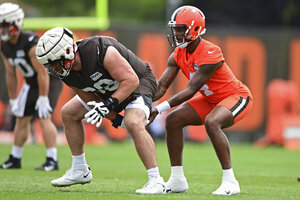 Talks between the NFL and NFL Players Association on a discipline settlement for Cleveland Browns quarterback Deshaun Watson have progressed. However, it’s uncertain whether the two sides will reach a deal, two people familiar with the negotiations told The Associated Press on Wednesday.

The people spoke to AP on condition of anonymity because of the sensitivity of the case.

The sides are seeking a compromise before any punishment is handed down by Peter C. Harvey, a former New Jersey attorney general who was appointed by Commissioner Roger Goodell to rule on the league’s appeal of a six-game suspension already imposed on Watson by an independent disciplinary officer.

Last week, the AP was told Watson was willing to accept an eight-game suspension and $5 million fine. The league has been seeking a lengthier punishment for Watson, who was accused of sexual assault and sexual harassment by two dozen women in Texas.

The three-time Pro Bowl QB was allegedly sexually inappropriate with the women during massage therapy appointments while he played for the Houston Texans. Watson settled 23 of 24 civil lawsuits filed by the women.

It’s not known if Harvey is waiting for the sides to exhaust any possibilities of a settlement before ruling.

Watson has always denied any wrongdoing. Shortly before his debut for the Browns last week, Watson apologized for the first time “to all the women I’ve impacted.”

Watson’s contrition came as Harvey considered the league’s appeal of a ruling by independent arbiter Sue L. Robinson, who found the 26-year-old violated the league’s personal conduct policy with his alleged lewd behavior.

Robinson called his actions “egregious” and predatory and while she levied a six-game suspension, the league wasn’t satisfied and appealed. The NFL had been seeking a year-long suspension.