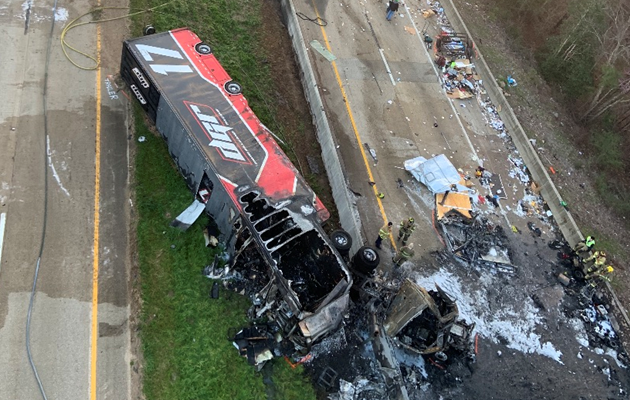 (Texas News Radio) — A truck hauling an ARCA Menards Series race car crashed with an SUV on Interstate 20 near Longview Tuesday morning, killing one and injuring three others.

The Texas Department of Public Safety said the hauler for David Gilliland Racing’s 17 car was going westbound on the interstate at around 4:25 a.m. a mile west of Estes Parkway behind a 2020 Honda Passport towing a small box trailer.  The driver of the hauler failed to slow down and struck the back of the SUV’s trailer.

The collision caused the hauler to roll onto its side into the center median of the interstate and caused the SUV to vault over the center concrete barrier.  The trailer ended up in the median and the SUV caught fire.

The driver of the hauler — a 54-year-old man from West Virginia — died at the scene.  His two passengers — a 38-year-old man and 45-year-old man, both from North Carolina — were taken to a hospital in Longview in stable condition.  David Gilliland Racing said the passengers have since been released from the hospital.  Troopers said the two passengers were not wearing their seatbelts and it was not clear if the driver was.

The driver of the SUV — a 63-year-old man from Alabama — was also taken to a Longview hospital in stable condition.  Troopers said he was wearing his seatbelt.

The hauler was on its way to the ARCA Menards Series next race, set for Friday night at Phoenix Raceway.