“Are they kidding?” William Shatner still can’t believe they used his face for Michael Myers in ‘Halloween’ 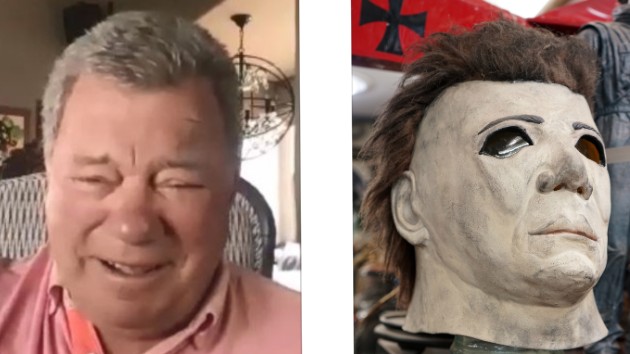 While most movie fans would instantly recognize the murderous Michael Myers from the Halloween movies, they might not know that iconic blank face actually belongs to another icon: William Shatner.

For the record, Shatner knows about it and he’s still not pleased. In a recent interview with YouTube entertainment reporter Jake Hamilton, Shatner explained, “I thought, ‘Is that a joke? Are they kidding?’” when he was first heard his face was borrowed.

“I recognized it as the death mask they had made for me,” Shatner explained. “They made a mask of my face on Star Trek out of clay so I would not have to be available for the prosthetics they would have to put on my face…So somewhere along the line, someone got that mask and made a mask for Halloween [the holiday].”

Decades ago, that mask was grabbed off the shelf by Halloween‘s production designer and editor Tommy Lee Wallace for the 1978 horror classic when director John Carpenter needed a scary baddie. According to Netflix’s The Movies That Made Us, which takes a deep dive Halloween, the choices were a “sad sack” clown mask, or Captain Kirk.

Carpenter went with Kirk. But there’s a “but.”

Wallace explained in Movies That Made Us that he shaved the mask’s triangular Trek sideburns, cut its eyeholes wider, darkened its blonde hair, and painted it “appliance white” to result in its trademark deathly pallor.

“As soon as the second mask came out of the dressing room, we’re all, ‘Oh, f*** me!” Wallace said of his handiwork. “We knew we had a movie.”

Halloween Kills, the latest franchise installment, is now in theaters and streaming on Peacock.